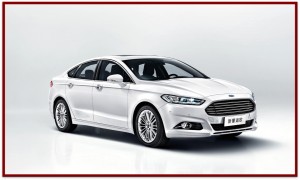 Mondeo will be the first car in its mid-size segment, and the first Ford vehicle globally to be equipped with Ford’s 1.5-liter EcoBoost engine.

Ford’s long-standing flagship car, Mondeo, revealed its latest major revision in China at the Shanghai Motor Show instead of one in its European home market. Ford Europe has pushed back the introduction of the proposed 2015 model to save money as its losses grow to a projected $2 billion this year. In China, the Mondeo is one of 15 vehicles the company has promised to bring to the country by 2015.

With its fresh exterior redesign, the all-new Mondeo will be available only as a four-door sedan in Asia with the station wagon held for Europe. Mondeo will be the first car in its mid-size segment and the first Ford vehicle globally to be equipped with Ford’s 1.5-liter EcoBoost engine. It is the fifth and latest member in a family of EcoBoost engines, which includes a 1-liter three-cylinder, 1.6- and 2-liter four-cylinders, and two 3.5-liter V6 versions.

The downsized four-cylinder engine will deliver what’s promised to be “class-leading” but unspecified fuel economy, although Ford fuel economy claims are being criticized in the U.S. as unattainable during real world driving conditions. The new 1.5-liter will eventually find its way into the U.S. Fusion that is also built off Ford’s global C/D platform.

Mondeo is the first Ford to use headlamps with LED high beam, low beam and signal lighting. Quicker to illuminate, more durable and energy efficient than filament bulb headlamps, the headlamps turn with the steering and adapt beam projection to vehicle speed – with a greater depth of illumination at high speeds and a wider field of vision at lower speeds. U.S. safety regulations currently do not allow such advanced designs, which are becoming dominant in European upmarket vehicles.

Mondeo is also the first vehicle in China to be equipped with rear inflatable seat belts, which combine attributes of an airbag and conventional seat belt. These are designed to reduce head, neck and chest injuries for rear seat passengers, especially children and older passengers who are more vulnerable to such injuries. In the event of an accident, the belt rapidly expands to disperse crash forces across a body area five times greater than that achieved by a conventional seat belt.