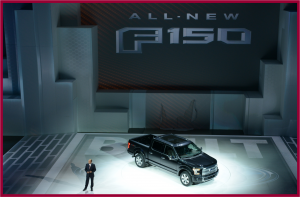 Can you believe an F-150 pickup with lots of aluminum pieces from the ‘tough truck’ people at Ford? The 2015 model F-150 that debuted at NAIAS is all new with the use of more high-strength steel, and for the first time aluminum alloys for body panels and the cargo box. Overall, up to 700 pounds of weight have been saved, helping the F-150 tow more, haul more, accelerate quicker and stop shorter than the outgoing model, according to Ford.

It is too soon for direct comparisons with the Chevrolet Silverado, Dodge Ram and GMC Sierra because of the lack of detail in the media presentation. Some of the savings no doubt come from substituting smaller engines for a V8, but not all. No curb weights were given.

Ford is trying to get ahead of increasing fuel economy regulations here, but in the absence of how fuel is saved versus how much the new truck will cost, it’s impossible to predict what customer reaction will be. Moreover, aluminum will pose challenges for body shops, since the F isn’t a low volume vehicle like a Ferrari or even an Audi. More than one million could be on the road after a little more than one year of production at current selling rates for the most popular vehicle in the U.S.

The newly added 2.7-liter EcoBoost V6 – used in the Flex – comes with stop-start, with a claimed output as much as some mid-range V8s, with no fuel economy specified. F-150 trucks equipped with this optional engine come with grille shutters that stay open when more engine cooling is needed during low speed, stop-and-go driving or while working in hot weather. They automatically close to reduce aerodynamic drag at cruising speed. Other engines include a base 3.5-liter V6 engine, the existing 3.5-liter EcoBoost V6 and 5.0-lite r V8.

There is a remote tailgate, allowing the tailgate to be locked, unlocked and released with the key fob. The tailgate finally is damped, dropping down, hands-free, to a flat position when opened, following the current Silverado tailgate design.

Inside there is a 360-degree camera view, using exterior cameras to create a bird’s-eye view of the truck to help the driver park, maneuver in tight spots and navigate down narrow roads and trails. A new rear view camera design adds a dynamic line based on steering wheel angle in the display to help line up truck and trailer without requiring a spotter or having to get out of the vehicle.

There are high-wattage power outlets (400 watts, 110 volts) in the cab, allowing drivers to easily charge corded tools, battery chargers or mobile devices on-site or while in motion.

Ken Zino is an auto industry veteran with global experience in print, broadcast and electronic media. He has auto testing, marketing, public relations and communications expertise garnered while working in Asia, Europe and the U.S.
View all posts by Kenneth Zino →
This entry was posted in new vehicle and tagged aluminum, autoinformed, autoinformed.com, cafe, f-series, Ken Zino. Bookmark the permalink.