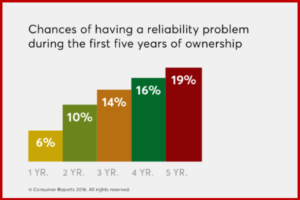 The best-selling vehicle in the U.S., the Ford F150 pickup truck, was dropped from the recommended list in the 2016 Annual Reliability Report by  Consumer Reports because of numerous problems reported from readers. The Auto Reliability findings were announced during a press conference before the Automotive Press Association in Detroit today. Honda’s popular Civic model showed a “much-worse-than-average” reliability due to problems with its power equipment and infotainment systems. The Civic was North American Car of the Year for 2016, and has been on CR’s recommended list almost forever.

Buick, GM’s semi-luxury brand, has been in the Top Ten of CR’s brand reliability rankings for the past several years. CR’s latest findings show Buick at third trailing Lexus and Toyota  for the first time since CR began tracking brand performance in the early 1980s. Chevrolet ranks as the second-best domestic brand, but it is in 15th place overall among the 29 brands covered. I doubt you will see any time soon “We’re Number 15!” bow-tie banners at dealers.

Consumer Reports first published its annual brand reliability rankings in 2001. That initial analysis showed that Detroit Three vehicles had trailed Japanese and European imports for the previous 20 years. This makes Buick’s third-place finish the highest for any American brand in more than 35 years.

“One reason why the Buick has been able to leapfrog others in the General Motors’ stable has been its limited vehicle lineup–with none of the pickups and truck-based SUVs that have negatively impacted Cadillac and Chevrolet,” said Jake Fisher, Consumer Reports’ director of automotive testing.

Sadly, for workers at the Detroit Three, all Asian nameplates scored among the top half of the 29 brands tested, yes all, accounting for seven of the Top Ten spots. Lexus and Toyota continued their domination, finishing in first and second place for the fourth straight year. All nine Lexus models CR rated had better-than-average reliability, as would have Toyota, had it not been for the below average score of the redesigned 2016 Tacoma pickup truck.

Among the other Asian brands, Infiniti made the biggest gain, while Acura was up six spots and Nissan moved up two. All Mazda models remained above average except for the new CX-3 small SUV, which came in at average. Kia and Hyundai continue to rise in the rankings, coming in at five and seven this year. No Kia or Hyundai models scored below average. Honda has continued with “its erratic trajectory,” at number 10 among all brands. Usually a top finisher known for reliability, the brand has been hurt by new introductions. In addition to the new Civic, the redesigned Pilot SUV was just average.

Historically a strong performer, CR claims that Subaru is an example of how smaller manufacturers can be helped or hurt by the performance of one or two models. Subaru fell out of the top 10, wounded by the 2016 Legacy and Outback falling to average, and the WRX/ STi dropping to below average.

Reliability improvements helped some luxury brands move up. Infiniti jumped 16 spots to number eight, but the brand still runs hot and cold. The older QX50 SUV and Q70 sedan had top scores, but the newer QX60 SUV and Q50 sedan were below average. BMW also moved into the top 10, with the 5 Series, X5, and i3 improving to average.

Audi has had several years of progress, and it continues to rank in the top five. The new Q7 and the Q3 SUVs were very reliable. Other European brands continue their inconsistency. Mercedes was one of the big movers, jumping four spots to number 17. The 2016 GLC, which replaced the reliable GLK, launched with well-above-average reliability, and the GLA and GLE SUVs were average. But the large GLS SUV was among the 20 most trouble-prone new cars in the survey, and the C- and S-Class sedans remained unreliable.

Fiat-Chrysler continue to be a depressing example of Detroit’s lack of quality or care for is customers. The Fiat 500L, the most defect-prone new car for the past two years, is now only the seventh-most troublesome. No Fiat or Ram vehicle managed even an average reliability rating. Only the Chrysler 300 sedan, Dodge Grand Caravan minivan, and Jeep Patriot SUV managed an average or better score.

Founded in 1936, Consumer Reports has achieved gains for consumers on food and product safety, financial reform, health reform, and other issues. The organization has advanced policies to prohibit predatory lending practices, combat dangerous toxins in food, and cut hospital-acquired infections. Consumer Reports tests and rates thousands of products and services in its 50 labs, auto test center, and consumer research center. It also works to enact pro-consumer laws and regulations in Washington, D.C., in statehouses, and in the marketplace. An independent non-profit, Consumer Reports accepts no advertising, payment, or other support from the companies that create the products it evaluates.

Ken Zino is an auto industry veteran with global experience in print, broadcast and electronic media. He has auto testing, marketing, public relations and communications expertise garnered while working in Asia, Europe and the U.S.
View all posts by Ken Zino →
This entry was posted in customer satisfaction, quality and tagged 2016 Auto Reliability, autoinformed, autoinformed.com, consumer reports, Ken Zino. Bookmark the permalink.