Ford Family and Other Shareholders to Receive Dividends

Posted on 8 December 2011 by Kenneth Zino 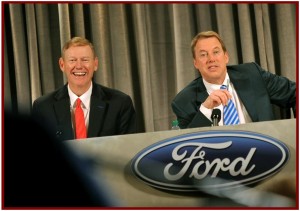 Both the CEO and Chairman will make millions per year on dividends alone even at 5 cents a share. Roughly 60 family members hold Class B stock.

The Board of Directors of Ford Motor Company – NYSE:F – today declared a quarterly dividend of 5 cents per share, the Number Two U.S. Automaker said in a release. The dividend is payable on 1 March 2012, to shareholders of record of Class B and common stock as of 31 January 2012. More than 3.8 billion shares are outstanding. Ford issued more shares of common during the Great Recession diluting common shares by at least 11%.

This is the first time Ford Motor has paid a dividend since September of 2006 when it stopped as Ford was preparing to borrow $23.5 billion to help it survive declining sales and an uncertain economic outlook. The move, which included mortgaging even the Ford brand name, was either prescient or lucky, since it kept Ford out of bankruptcy in 2009 as the Great Recession forced the restructurings of General Motors and Chrysler. Ford at the time, though, did accept almost $6 billion in subsidized loans from U.S. taxpayers to refurbish its plants.

Ford still remains heavily in debt – at $12.7 billion. However, Ford decreased automotive debt by $1.3 billion in the third quarter of this year, including payment of the remaining $1.8 billion balance of secured Term Loan debt, partially offset by an increase in controversial taxpayer-subsidized low-cost loans from the Department of Energy. Ford is also facing heavier losses in Europe, where it has been losing money for years. If the Euro collapses taking the EC economies into a deep recession or worse Ford shareholders will suffer.

Nevertheless, Ford returns are slowly  improving. In Q3 2011, Ford Motor earned a net income of $1.6 billion, or 41 cents per share.  More importantly, Ford generated positive automotive operating-related cash flow of $400 million in the third quarter, which if it continues will allow Ford to pay down debt and offer the modest dividend going forward.  Year-to-date Ford has earned almost $7 billion, and shareholders – with the stock languishing at $11 without a dividend  – have been very patient.

For years Ford had maintained that it would not pay a dividend until its stock returned to investment grade, a promise it couldn’t keep since the rating agencies, not Ford, determine if its bonds are better than junk.

Paying a dividend was also forbidden under covenants for the bonds that kept Ford out of bankruptcy during the Great Recession so the return of the dividend is just the latest sign that Ford is recovering. Nonetheless, Ford debt remains below investment grade according to the three rating agencies, whose false and extremely positive ratings of what were toxic mortgage assets plunged the world into an ongoing economic crisis starting in 2008 when debtors and speculators by the millions defaulted on the worthless paper.

However, not paying a dividend for years hurt the Ford family, which controls the company through its complete ownership of 70.85 million Class B shares of stock, even though the 60 family members hold only roughly 6% of the company when common stock is included, and few of them actually work there.

1 Response to Ford Family and Other Shareholders to Receive Dividends