Ford Family Defeats One Share, One Vote at Annual Meeting 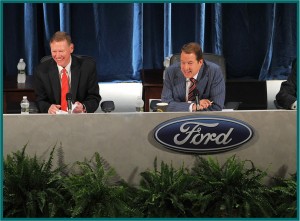 Not surprisingly, Ford Motor management –vetted by the family – was against the proposal.

Just 69 people attended the Ford Motor Company 58th annual meeting last Friday in Wilmington, Delaware, but 3,162,247,188 shares of common stock and 70,852,076 shares of family owned Class B stock were represented. Once again, the Ford family with its 16 votes for every share of class B beat back a dissident shareholder proposal that would recapitalize the company at one vote per share. All told, a total of 5,734,531,807 votes were vote at the meeting.

The One Vote per Share measure, part of a larger trend with common shareholders demanding more accountability as well as more moderation in executive compensation and other democratic ideas, grew in popularity by garnering 4,508,110,660 of the votes cast for 33.4% of the total. This appears to be the largest approval rate ever for an independent proposal at Ford Motor Company.

Once again, the proposal was put forth by the Ray T. and Veronica G. Chevedden Family Trust of Los Angeles, California as it has for several years now. The trust and other shareholders want to end the Ford family control of the automaker via their special voting rights of Class B stock. “It is time that the 57-year practice (1956-2013) of disenfranchising Ford public shareholders be changed for the common benefit of all shareholders,” the proposal said.

Critics, including apparently those holding more than 50% of the common shares voted, contend that the dual class voting stock reduces accountability by allowing corporate control to be retained by insiders disproportionately to the actual amount of their money at risk. The Council of Institutional Investors is calling for stock exchanges to adjust a complaint it has had for decades, shares with unequal voting rights. Not surprisingly, Ford Motor management –vetted by the family – was against the proposal.