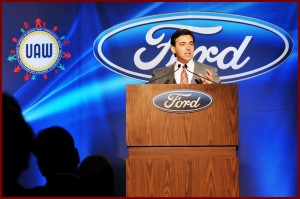 Ford claims the July transition is six months earlier than previously “anticipated,” a position Mulally was reiterating as recently as last week – but who really knows what was planned.

After of months of speculation and rumors, Ford Motor Company has finally confirmed that Alan Mulally, 68, will retire on 1 July after serving as president and CEO since September 2006. Taking his place is Mark Fields, 53, who has served as COO since December 2012. He has been leading all of Ford’s global business operations, including product development, manufacturing, purchasing, and marketing, sales and service. Prior to that Fields ran Ford North America since 2005.

Fields is a controversial figure who some senior executives at Ford referred to as a show horse as opposed to a work horse. Given the always-messy succession issues at Ford – with the family vying for top leadership positions against outside professional managers who have a demonstrably better record since the Deuce, the only fair thing AutoInformed can say is that we will look at the record going forward, and not the back biting of the past surrounding Fields. He inherits an under performing company with large quality challenges. (See Ford Motor Q1 Pre-Tax Profit $1.4 Billion. Net $989 Million. Both Down)

Under Mulally, Ford avoided bankruptcy, achieved 19 consecutive quarters of profitability, and restored the dividend, then increased it, which is crucial to working and non-working Ford family members. (See Ford Motor Company Board Increases Dividend)

Surprisingly, Ford admitted that the transition in July is six months earlier than previously “anticipated,” a position that Mulally was reiterating – claiming the plan hadn’t changed – as recently as last week. Who really knows what was planned, the previous public position was vague – following what is now claimed to be Mulally’s “recommendation to accelerate the timetable.” His flirtation with taking the top job at Microsoft likely caused the Board – and / or the family – to say enough is enough. In any event, Ford Motor moves on – for the moment – with a non-family head.

Ken Zino is an auto industry veteran with global experience in print, broadcast and electronic media. He has auto testing, marketing, public relations and communications expertise garnered while working in Asia, Europe and the U.S.
View all posts by Ken Zino →
This entry was posted in people and tagged autoinformed, autoinformed.com, Ken Zino, mark fields, Mulally. Bookmark the permalink.