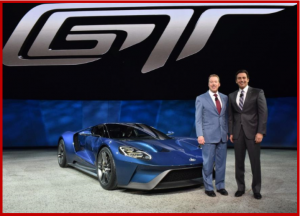 Ford unveiled an all-new GT at the North American International Auto Show with lightweight carbon fiber construction. Beginning production late next year, the Ford GT will be on the road in select global markets in time to celebrate the 50th anniversary of Ford GT race cars placing 1-2-3 at the 1966 24 Hours of Le Mans.

Ford would not confirm an endurance-racing program is underway, but it is virtually certain. Ford’s twin-turbo EcoBoost V6 raced to three wins in its first season of the IMSA TUDOR United SportsCar Championship in 2014, including a win at the 12 Hours of Sebring, along with seven podiums and more than 15,000 endurance-racing miles.

“It’s worth remembering that our first innovation as a company was not in a laboratory, but on the racetrack,” said Mark Fields, Ford president and chief executive officer, referring to Henry Ford’s win of a 1901 car race that inspired financial backers to invest in his company.

The all-new GT supercar has rear-wheel-drive, a mid-mounted engine, and an aerodynamic, two-door coupe body. The most powerful EcoBoost production engine ever – a next-generation twin-turbocharged V6 producing more than 600 horsepower is mated to a seven-speed dual-clutch transaxle. An all-new, port/direct dual fuel-injection design improves engine response. There is also a low-friction roller-finger-follower valvetrain.

Ford said the GT makes extensive use of lightweight materials, including carbon fiber and aluminum. All factors of a car’s capabilities – acceleration, handling, braking, safety, efficiency – can improve with advanced, lighter materials.

EcoBoost engines power a growing number of Ford performance models, including the new Mustang, just-announced F-150 Raptor, as well as Fiesta ST and Focus ST.
The GT is one of more than 12 new Ford Performance vehicles coming by 2020. It joins Focus RS, F-150 Raptor, Shelby GT350 and Shelby GT350R.

Ken Zino is an auto industry veteran with global experience in print, broadcast and electronic media. He has auto testing, marketing, public relations and communications expertise garnered while working in Asia, Europe and the U.S.
View all posts by Ken Zino →
This entry was posted in concept, performance, racing and tagged autoinformed, autoinformed.com, ford gt, Ken Zino. Bookmark the permalink.