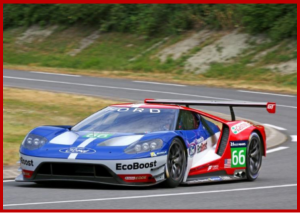 Ford announced today in France that it is returning to endurance racing with its GT that will compete in the 24 Hours of Le Mans and other sports car races. The new race car is based on the Ford GT supercar unveiled in January at the North American International Auto Show, and will make its race debut at the Rolex 24 at Daytona in January 2016.

Both the production car and race car will appear in 2016 to mark the 50th anniversary of the original Ford GT placing 1-2-3 at the 1966 24 Hours of Le Mans. That year Ford beat Ferrari in the far faster and more expensive unlimited class, and it did it by packing the field with almost 25% of the cars in the prototype class. Ford went on to repeat its victory at Le Mans in 1967, 1968 and 1969 when the Europeans changed the rules, effectively banning the cars.

The all-new GT supercar has rear-wheel-drive, a mid-mounted engine, and an aerodynamic, two-door coupe body. The most powerful EcoBoost production engine ever – a next-generation twin-turbocharged V6 producing more than 600 horsepower is mated to a seven-speed dual-clutch transaxle. An all-new, port/direct dual fuel-injection design improves engine response. There is also a low-friction roller-finger-follower valvetrain.

The Ford GT racecar will run the full 2016 schedules of the FIA World Endurance Championship and TUDOR United Sports Car Championship, making its competition debut in January 2016 in the Rolex 24 at Daytona, Florida.

Chip Ganassi Racing with Felix Sabates (CGRFS) will operate the two Ford teams. Both series teams intend to compete with a four-car effort at Le Mans. Drivers will be announced later.

“I think it would be a little too rambunctious to come over here with a strictly American team, so we have some people with quite a bit of experience at Le Mans,” Chip Ganassi said. “We’ll have two bases. One in probably the UK and one in the States.”

In only its second season this year a heavily modified Ford EcoBoost engine  that will be used in the GT has won the two most important endurance races in North America – the 2014 12 Hours of Sebring and the 2015 Rolex 24. The EcoBoost program has now posted four Prototype victories overall with Chip Ganassi Racing, including the 2014 Long Beach and Circuit of the Americas events.

Ken Zino is an auto industry veteran with global experience in print, broadcast and electronic media. He has auto testing, marketing, public relations and communications expertise garnered while working in Asia, Europe and the U.S.
View all posts by Ken Zino →
This entry was posted in performance, racing and tagged autoinformed, autoinformed.com, Ken Zino, le mans. Bookmark the permalink.