Ford Kicks off Racing Season with Win at Daytona 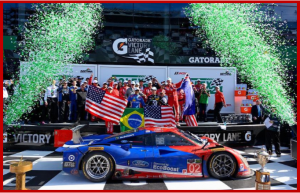 Ganassi appears to be the odds-on favorite to run the yet unconfirmed Ford GT racing program when Ford returns to Le Mans in 2016, fifty years after its podium sweep there in 1996.

In only its second season, a heavily modified Ford EcoBoost engine has won the two most important endurance races in North America – the 2014 12 Hours of Sebring and the 2015 Rolex 24. The EcoBoost program has now racked up four Prototype victories overall with Chip Ganassi Racing, including the 2014 Long Beach and Circuit of the Americas events. The Corvette C7R is also developing nicely, beating Aston Martin, BMW and Porsche at Daytona. 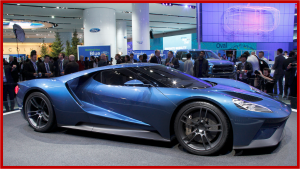 What’s  left is confirming the racing program, and the class the car will run in at Le Mans – GT or LMP1 –  the fastest class that Audi has dominated recently,and Ferrari and Porsche have historically posted multiple victories.

Ganassi appears to be the odds-on favorite to run the yet unconfirmed Ford GT racing program when Ford returns to Le Mans in 2016, fifty years after its podium sweep there in 1996, likely running in the GT3 class.

“It was a great day for Ford and a great day for Ganassi,” said Raj Nair, Ford group vice president, Global Product Development, who accepted the manufacturer’s trophy on behalf of Ford. “We had a great car and great drivers.”

Led by Dixon, who took the first and last stints in the No. 02 Target Ford EcoBoost-Riley, the team battled through lead change after lead change in the premier Prototype class.

“You have to look out for the car so you have the speed in the end to compete for the win,” said Dixon.

Ford EcoBoost is available in every new Ford car, utility and light-duty pickup in North America beginning this year. In addition, EcoBoost technology will continue to power race cars on the track in 2015, competing for a championship title with Chip Ganassi Racing with Felix Sabates in the No. 01 Ford EcoBoost-Riley prototype. The season continues March 18-21 with the 2015 12 Hours of Sebring.

Ken Zino is an auto industry veteran with global experience in print, broadcast and electronic media. He has auto testing, marketing, public relations and communications expertise garnered while working in Asia, Europe and the U.S.
View all posts by Ken Zino →
This entry was posted in marketing, racing and tagged autoinformed, autoinformed.com, Daytona, ford gt, Ken Zino. Bookmark the permalink.