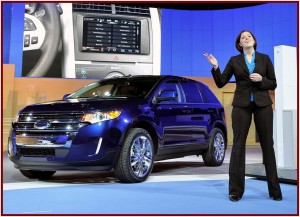 Rather than improving safety, MyFord Touch actually degrades it. Customers are unhappy.

While Ford keeps claiming its people want electronic features such as MyFord Touch, saying 56% of them rate the technology as an “important” part of the buying decision, its quality and customer satisfaction ratings by actual users as measured by independent sources have plummeted during the three years since introduction.

Associated with My Touch is My Sync, a voice-recognition system designed to move control of vehicle entertainment, climate, navigation and communication from fingers to voice commands.  In theory, it is intended to keep driver attention undistracted from the road. In practice, and in combination with the ill-executed My Touch, there is increased necessity to take eyes from the road to the center-stack touch screen for manual control of functions.

There are more than 400 voice commands listed in the Owner’s Manual.  Who could ever remember even a fraction of those?   Rather than improving operational safety, the My Touch monster actually degrades contributing to distracted driving deaths and injuries.

Last week Consumer Reports took its latest swipe at the Microsoft software run telematics and touch screen controls, by moving Ford down five places to tenth in its Automaker Report Card, following a 10-position drop to 20th, far below average – the largest decline of any automakers – in its annual predicted reliability survey. CR had both hardware and software failures in its Ford and Lincoln test vehicles, as well as numerous complaints from Ford product owners in its annual quality survey.

J. D. Power & Associates Initial Quality Survey this year downgraded Ford to 23rd place from fifth. Power noted that while automakers are accelerating the introduction of multimedia technology into their models, including hands-free and voice-activation systems, “Many consumers are attracted by this type of technology, which is perceived to enhance convenience and safety, but some vehicle owners report that their system is not intuitive and/or does not always function properly.” Ford Motor took a huge hit because of this.

As a result of ongoing complaints, current MyFord Touch and MyLincoln Touch-equipped vehicle owners this week will begin receiving the no-cost software “upgrade.” The upgraded system will also be on all new 2013 models that offer MyFord Touch, which can cost as much as $5,000 since it is bundled with other equipment packages. A simplified interface and faster performance for the system is claimed.

The improved software will be mailed to more than 300,000 current owners in a do-it yourself package, which includes a USB flash drive with the updated software, a notification letter, detailed instructions for the 60-minute download, and an updated user guide.

While automakers have previously sent parts to owners as part of customer satisfaction programs, this appears to be the first electronic recall using a flash drive. The owners of vehicles with navigation systems also will receive an updated SD card updated map data. A dealer can also perform the upgrade. (See also Quality Drops Drastically as Automakers Introduce New Models )