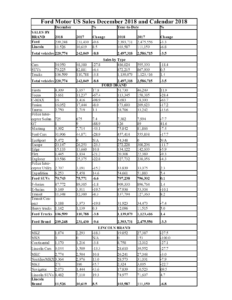 Full-year Ford Motor U.S. sales totaled 2,497,318 vehicles or -3.5% as Ford continues to ride the truck boom, but can’t give away cars because Toyota, Nissan and Honda dominate that segment.

Nonetheless, based on trucks that are largely unsalable elsewhere, Ford marked its ninth straight year as America’s favorite brand. However, Toyota is the number one retail selling brand for 17 consecutive years.

Ford Expedition had a retail sales gain of +47.2% in December and a +35.4% retail increase for the year. This comes with the addition of Ford EcoSport to the SUV lineup, for total sales of 54,348 SUVs in 2018, providing Ford brand SUVs with another record sales year.

The continued stronger mix of trucks and SUVs at Ford Motor meant an expanded transaction pricing for another new record of $38,400 in December, a $1,600 increase compared to December last year. This outperforms the industry average of  a $470 increase for the overall industry at $34,000 per vehicle.