Ford Motor in Corktown and Newlab Working on – What Else – Vehicle Connectivity, Autonomy and Electrification 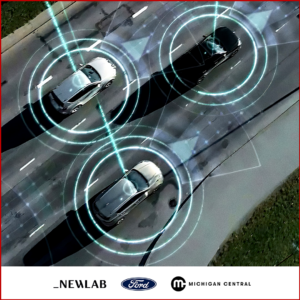 The studios will work together with Detroit and Michigan-based (Nerd Jargon Alert for what follows – editor) “accelerators and incubators, helping to grow the local startup ecosystem and add new talent, businesses and capital.”

Now Michigan Central and Newlab will launch two new studios focused on mobility. A corporate studio sponsored by Ford starts this summer to address “macro mobility” issues. A second civic studio will follow looking at immediate mobility issues in the blighted neighborhoods around Michigan Central  Station. This time the release might predict something real could emerge.

The first workspaces within Michigan Central will open in 2022. Newlab’s studio model brings entrepreneurs, engineers, and inventors together with leaders and experts across cities, regions and industries to solve “the world’s most pressing challenges.​” To date, Newlab has supported its member companies in raising more than $700M in capital, with more than $400M of recent acquisitions, and a collective valuation of ~$2.6B.

In establishing the mobility innovation studios for Michigan Central, Newlab will work together with the “existing community of accelerators and incubators in Detroit and Michigan, attracting talent and capital from outside the region and supporting homegrown companies and entrepreneurs.”

Newlab will draw on talent from its existing community of 155 startups, especially those companies helping make cities more equitable, livable and resilient. Its member companies include Carmera, a road intelligence platform; Tarform,​ ​a new type of electric motorcycle​; Optimus Ride, the first AV shuttle in New York; and Roadpo​wer Systems, a platform to generate grid-grade electricity using energy recovered  from vehicles in motion. The  CEO of Newlab who spent over two years building the self-driving car business at Waymo, a division of Google X, mobility has “naturally emerged as a focal point.”

“Detroit is the birthplace for modern manufacturing, and Ford is the beating heart of the country’s automotive industry. Therefore, Michigan Central is the perfect place for Newlab’s model of collaborative, diverse, and dynamic innovation,” claimed Shaun Stewart, CEO of Newlab. “Our studio model will support the overall development of Michigan’s startup ecosystem, making the pie bigger for everyone and helping local startups to stay, grow and thrive here.”