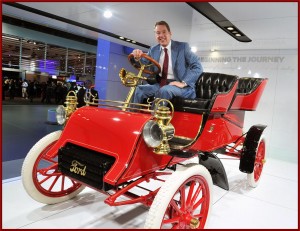 The Board of Directors of Ford Motor Company declared a Q3 dividend of $0.125 per share on the company’s outstanding Class B stock– controlled by the family – as well as shares of publicly traded common stock. This is the same dividend paid in Q1 and Q2 of 2014, which was a 25% increase from the dividend paid in each quarter of 2013.

Last December Ford Motor said that 2014 earnings would be lower than originally forecast – projected at $7 to $8 billion, due in part to an ambitious launch schedule with $7.5 billion in capital expenditures.

Full year 2013 Ford Motor pre-tax profits were $8.6 billion, an increase of $603 million compared with a year ago. This was one of the best years in FMC history, with strong revenue growth but lower than projected margins, improved market share in all regions except Europe, and despite recalls and warranty expenses on some of its best selling models, including the Escape.

Ken Zino is an auto industry veteran with global experience in print, broadcast and electronic media. He has auto testing, marketing, public relations and communications expertise garnered while working in Asia, Europe and the U.S.
View all posts by Ken Zino →
This entry was posted in financial results and tagged autoinformed, autoinformed.com, ford dividend, Ken Zino. Bookmark the permalink.