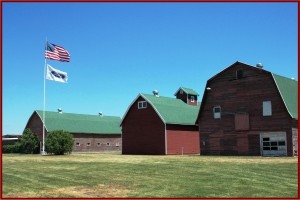 Cherry Hill is an 882-acre operation in Washtenaw County, Michigan that produces corn, soybeans, wheat and hay. Once used by Ford’s now long defunct Tractor Division for testing, the land is cultivated  by the VanWashenova family. The property includes three historic barns and a house.

Starting in 1906 and continuing through the early part of the 20th century, Henry Ford bought 26,000 acres of rural property in southern Michigan, and Ford himself managed some of it. During these years, Ford began experimenting with agricultural techniques, crops and tractors.

Recently, Ford began restoration of the Cherry Hill. Of the three barns, one is restored, one is in the middle of the process and the third will begin restoration next year. In addition, work has been done to the old house including new siding and windows.