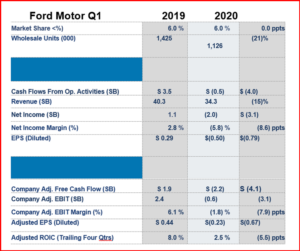 While Ford shut down its plants around the globe in March, cash use has remained high because production supplier payables are about 45 days. The company’s cash outflow – it is claimed – will be substantially lower after early May as Ford pays down those payables. (UAW Pressure: Ford Further Postpones NA Production Restart, Ford Motor Maxes Out Lines of Credit)

The company recorded a volume-driven Automotive EBIT loss of $177 million, as $346 million in positive EBIT from North America was more than offset by Auto losses in other regions. The quarterly loss in Mobility was expected, as Ford continues to invest in growth from related services, as well as in autonomous vehicles and the underlying business model.

Ford Credit delivered $30 million in first-quarter earnings before taxes, down $771 million from the same quarter a year ago. Strong portfolio performance was offset by about $600 million from increased credit-loss reserves, and higher depreciation on off-lease vehicles awaiting sale and anticipated operating lease defaults – all reflecting estimated impact of the coronavirus in future periods.

At the end of the first quarter, Ford and Ford Credit had $35.1 billion and $28.0 billion in liquidity, respectively. Ford Credit remains a source of support for customers and dealers, with a strong, inherently liquid balance sheet thus far. The financing unit is generating liquidity as its balance sheet size declines with lower consumer demand for vehicles. As of April 24, Ford had a cash balance of $35 billion.

“We’ve taken decisive actions to lower our costs and capital expenditures and been opportunistic in strengthening our balance sheet and optimizing our financial flexibility,” claimed Tim Stone, Ford’s CFO. “We believe the company’s cash is sufficient to take us through the end of the year, even with no additional vehicle wholesales or financing actions.”

To maximize cash and preserve financial flexibility through and beyond the pandemic, Ford:

In March, Ford withdrew guidance for 2020 financial performance it had given in early February. That outlook excluded possible implications of the coronavirus, which at the time had not yet reached pandemic stage.

According to Stone, today’s economic environment remains too ambiguous to provide full-year 2020 financial guidance. He said the company expects second-quarter adjusted EBIT to be a loss of more than $5 billion, as year-over-year industry volumes decline significantly in every region.