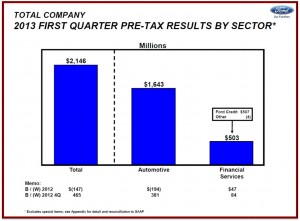 The Ford Motor profit of 41 cents per share was $147 million lower than a year ago.

Ford Motor Company [NYSE: F] today reported a Q1 2013 pre-tax profit of $2.1 billion based almost entirely on positive results in North America where the car and light truck market is recovering. Net income for the first quarter of $1.6 billion, or 40 cents per share, was $215 million higher than a year ago. The company sold 1.5 million vehicles globally during the first three months of the year, an increase of 140,000 compared to Q1 of 2012 with 110,000 of that coming from North America.

Operating margin was only 5.2% or about half that of leading automakers. The mid-decade outlook is “an 8% to 10% margin which as I mentioned a number of times in the past is a very, very strong margin in the automotive business on a consistent basis,” said Alan Mulally, Ford president and CEO on a conference call with reporters. 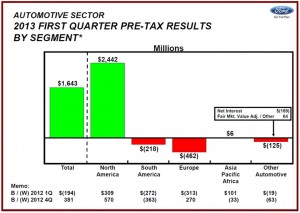 It will be years before Ford Motor earns a substantial return on its ongoing investments in India and China. The U.S. company is also vulnerable to further downturns in Europe, and a reversal of the recovery in the United States.

The Ford Motor profit of 41 cents per share was $147 million lower than a year ago as results in Asia were weak because of ongoing expansion; weaker still in South America because of currency problems in Venezuela and Argentina, as well as competition, and frankly disastrous in Europe where Ford has not been able to stem a flood tide of red ink for decades.

The Number Two U.S. automaker is projecting a loss of $2 billion this year in Europe, while sticking to its previous assertion that it will earn a total company Pre-Tax Operating Profit of $2.1 billion. Consistent with prior guidance, the company expects its full year operating effective tax rate to be similar to 2012, which was 32%. It will be years before the company earns a substantial return on its ongoing investments in India and China. Ford is also vulnerable to further downturns in Europe, and a reversal of the recovery in the United States.

Ford Motor made $1.8 billion in cash contributions to its worldwide under-funded pension plans during the quarter. This included $1.2 billion of discretionary contributions, in line with Ford’s long-term pension strategy.

Ken Zino is an auto industry veteran with global experience in print, broadcast and electronic media. He has auto testing, marketing, public relations and communications expertise garnered while working in Asia, Europe and the U.S.
View all posts by Kenneth Zino →
This entry was posted in auto news, financial results and tagged autoinformed, autoinformed.com, ford motor, Ken Zino, q1. Bookmark the permalink.