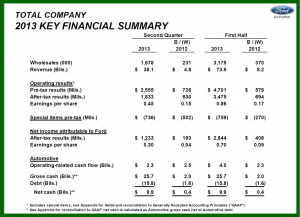 The good overall result, which had analysts gushing over an automotive operating margin of 6.4%, improving 1.5 percentage points from 2012 at $726 million or 15 cents per share higher from a year ago.

Virtually of all Ford’s profits were derived from vehicle sales and financing by Ford Credit in North America from a recovering vehicle market, which resulted in Q2 and first half N.A. records at the Number Two automaker in the U.S.

Europe in spite of a sale increase remains a disaster, with Ford losing $348 million during Q2 and $810 million in the first half of 2013. There was a slight profit recovery in South America at $151 million from an exchange-driven loss in Q1. (It had been profitable for nine years in a row until the first quarter.)

However, South America remains problematic going forward. The Brazilian people – notably the middle class – are demonstrating against a corrupt government and billions in subsidies for hosting World Cup soccer and other sporting events in the region’s largest economy by far. There is also unrest to chaos in Argentina and Venezuela, which is making forecasters cautious.

There was a best-ever profit in Asia Pacific Africa of $177, which was hurt by the payment of royalties to Chinese government dictated partners in what remains the world’s and Ford’s fastest growing market. For the first half of 2013, Ford Motor and its partners sold 600,000 vehicles up from 467,000 in the comparable period of 2012.

During the second quarter, the company settled $1.5 billion of pension obligations for its U.S. salaried retiree voluntary lump sum program, with $2.7 billion settled since the inception of the program in August 2012. Because of the Q2 payout, Ford posted a special item charge of $294 million, reflecting the acceleration of unrecognized losses in the plan. The lump sum program is 60% complete and concludes at the end of the year. Ford still has roughly $18 billion AutoInformed estimates in unfunded pension liabilities in North America and Europe, a problem that will take years to resolve. Ford only provides unfunded pension numbers in annual results. Last year it was -$18.7 billion.

Ford Motor has total automotive debt of 14.3 billion, which includes a $5.6 billion balance of a $5.9 billion Energy Department loan subsidized by U.S. taxpayers. However, its liquidity – gross cash net of automotive debt – is $37.1 billion as of 30 June 2013.