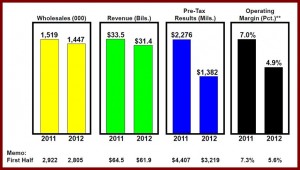 Ford said it would be profitable for 2012, but results would decline from 2011 even as the North U.S. auto market recovers with annual sales of more than 14 million units.

Ford stock is trading at ~$9, the lower end of its 52-week range, even though the Number Two U.S. automaker is paying a 2.2% dividend to the controlling Ford Family and common stockholders, which resulted in a $200 million charge in Q2.

The weak Ford performance is centered on lower operating results everywhere except for Ford North America. Higher taxes also negatively affected results.  Ford Europe alone lost $404 million in the quarter, a more than $1 billion swing negative from Q2 2011 as the Eurozone crisis deepens with no end in sight. Ford now admits that its full year loss in Europe will exceed $1 billion.

“It is premature to discuss details of what our plans may be in response to the situation in Europe, but we will continue to communicate our plans at the appropriate times with all of our stakeholders,” said the affable but beleaguered Bob Shanks, Ford executive vice president and chief financial officer, in an attempt to prop up the stock.

Nevertheless, Ford said it would be profitable for 2012, but results would decline from 2011 even as the U.S. auto market recovers with annual sales of more than 14 million units. Ford now expects to lose market share in Europe and the U.S. – Europe because of the collapsing market with heavy discounting that Ford can’t afford to match; the U.S. because of self imposed capacity constraints from extreme downsizing as well as the launch of new models such as the Escape, whose debut is already marred by two recalls, and the upcoming Fusion and Lincoln MKZ. Due to theis misreading of the market and flawed execution, Ford Motor sales were off 17,000 units in Q2. As expected, though, Ford North America recorded its second straight quarter with profits of more than $2 billion and an operating margin just above 10% based largely on the sales of the F-series pickup truck.

Ford Credit’s pre-tax results declined to $1.9 billion from $2 billion in Q2 2011, largely because stressed U.S. workers are not defaulting on their loans at previous rates. This means Ford sold fewer repossessed vehicles at a gain in a market that is short of late model used vehicles, with high trade-in or resale values. Ford Credit continues to predict a full year pre-tax profit of about $1.5 billion, and total distributions to Ford Motor of between $500 million and $1 billion, which given the large swing is hardly confidence building about management or, just as likely,  the floundering to stalled U.S economy.

In South America, Ford posted a slightly positive pre-tax operating profit – $5 million, which puts it in the hobby category as opposed to business category – and an operating margin of a mere 0.2% on revenue $2.3 billion. Revenue declined substantially from $2.7 billion a year ago, due to lower volume, higher costs, and unfavorable exchange rates.

Ford claimed that South America will be profitable for the full year, but it now expects the level to be substantially lower than 2011, reflecting increased competitive pressures, weakening currencies, and changes in government policies affecting areas such as trade and access to foreign currency.

In Asia Pacific Africa, where Ford lags badly, it showed a loss of $66 million – a -2.9% return on operating revenue –  largely due to new product launch costs her costs associated with new products and investments to support higher volumes and future growth, as well as other factors. Ford expects results to improve in the second half of 2012, due mainly to favorable volume and mix as Ford benefits from added capacity in China and Thailand and the all-new Focus and Ranger just launched.

Ford Motor finished the second quarter with automotive gross cash of $23.7 billion, an increase of $700 million during the quarter. Automotive debt of $14.2 billion at the end of the second quarter increased from $13.7 billion at the end of the first quarter, because of lavish taxpayer subsidies of low-cost loans for the development of advanced vehicle technologies. The company will make its last draw on these loans by August 2012, and repayment of the loans begins in September 2012.

Ford also made payments of $800 million to its worldwide funded pension plans, of which $500 million were discretionary payments to U.S. funded plans. Worldwide Ford has $15.4 billion in underfunded pension liabilities; including $9.4 billion in the U.S. Ford is in the process of closing many of its plans to new entrants and looking to move this huge liability off its balance sheet. Ford says it will be years before its pension plans are fully funded. Ford is in the process of offering to 90,000 eligible U.S. salaried retirees and U.S. salaried former employees the option of receiving a voluntary lump-sum payment for their pensions.

Automotive gross cash exceeded debt by $9.5 billion at the end of the second quarter, a net cash increase of $200 million during the quarter. Ford now projects 2012 global economic growth at 2% to 3%, with global industry sales at around 80 million units, up about 5% from 2011.