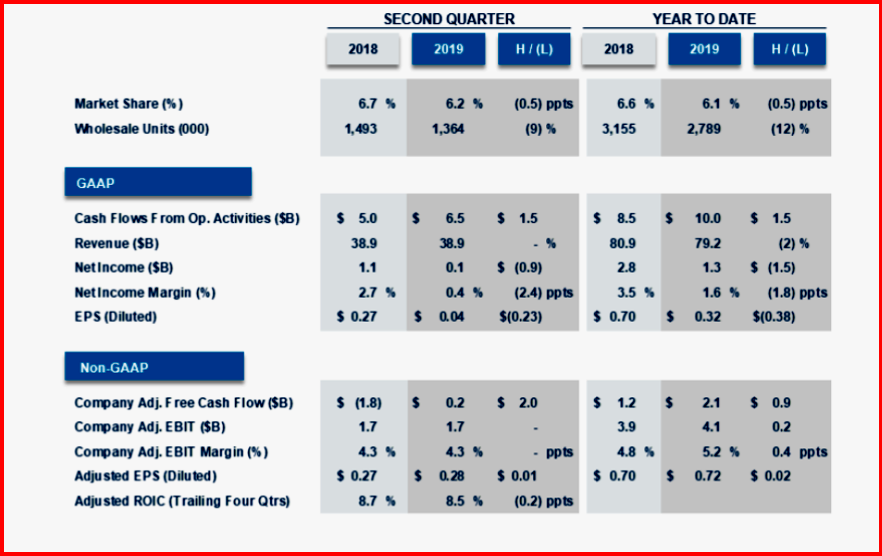 Ford Motor Company’s second quarter financial results were weak as the company continues to bring to market a fresh lineup of products that are supposed to build on its strengths.  This is before a possible but likely looming recession.

Overall, Ford’s reported net income was $148 million, net income margin was 0.4%, and earnings per share (EPS) was $0.04, all were down as a result of the latest ongoing global redesign and restructuring activities, primarily in Europe and South America. Those initiatives accounted for $1.2 billion of charges for special items. The company’s adjusted EBIT of $1.7 billion and adjusted EBIT margin of 4.3% were both flat. Adjusted EPS was $0.28.

Automotive earnings before interest and taxes (EBIT) in the quarter was $1.4 billion, up 19%, from improvement in mix and net pricing, especially North America’s strengths – and possible Achille’s heels – in truck and sport-utility models. This is the second consecutive quarter of EBIT growth in Automotive, though, the first time the company has achieved that in more than three years. Excluding pension and other post-employment benefits, structural costs also improved in the quarter.

The company claims it further strengthened its worldwide product portfolio, with launches of the all-new Ford Explorer and Police Interceptor Utility and new-to-market Lincoln Aviator, and Puma, an all-new compact crossover for the European market.

The company’s cash and liquidity balances are OK and above targets, finishing the quarter at $23.2 billion and $37.3 billion, respectively.

Cash flow from operating activities for the first half of 2019 was $10 billion, up $1.5 billion. Adjusted free cash flow for the same period was $2.1 billion, up 80%. (All comparisons are year-over-year, unless otherwise noted.)

“Midway through this key year of action, we are pleased with the progress we are making toward creating a more dynamic and profitable business,” claimed Jim Hackett, Ford president and chief executive officer.

Ford and Volkswagen this have announced a global alliance on commercial vehicles to include electrification. The two companies also said that VW will join Ford in investing in Argo AI, the autonomous-vehicle platform company. Pending regulatory approval, Ford and VW will have equal stakes in Argo AI, and combined will own a substantial majority of the innovative AV company. The AV and electric-vehicle collaborations could help both Ford and VW to improve competitiveness and realize cost and capital efficiencies. (Volkswagen Joins Ford by Investing in Argo AI, Volkswagen and Ford Announce Alliance Without Cross Equity)

The region delivered a good vehicle mix and net pricing, supported by F-Series trucks and a continued shift to SUVs and away from sedans. Those plusses were more than offset by launch-related lower volume, along with higher warranty costs from Ford’s ongoing quality problems. (Whoops! Now Ford Motor Has Emissions Problems, Ford Recalls 1.2M Explorer Models and Others for Defects)

Ranger again performed well in the market, with wholesales for the model completely offsetting the decline in the quarter from discontinued sedans, and its segment share increased to 14.2%.

All-new versions of Explorer and Escape are being introduced this year: Explorer is in production now; Escape will follow later this fall. By the end of 2019, Ford says it will have the freshest SUV lineup in the industry on a volume-weighted basis.

Ford of Europe’s EBIT of $53 million was $126 million better, as the company further executed its seemingly endless regional redesign. Results represented the first quarterly improvement in profitability in Europe in two years.

Ford remains the top commercial-vehicle brand in Europe, where the Transit model range set a second quarter record, up 2.7%.  An updated two-ton Transit and a Transit Custom Plug-In Hybrid will both be launching in the second half of the year. A new, all-electric Transit will be added to the company’s lineup of electrified commercial vehicles in 2021.

Revenue from consolidated China operations improved 48%, driven by higher volumes for Lincoln. However, an EBIT loss of $155 million was $328 million better than a year ago, supported by improvements from consolidated operations in volume, mix and pricing, and structural costs. Here Trump’s tariff wars loom large.

Ford’s China team has acted to steady sales, with second quarter retail sales up 13% sequentially, and at the same time has aggressively reduced inventory to improve dealer health. Dealer inventory finished the quarter at its lowest level in the past 18 months. Sales of the new Territory SUV accelerated in the quarter, making it the best-selling Ford SUV in China this year.

EBIT for Ford’s Mobility segment was a loss of $264 million, compared with a loss of $181 million a year ago. The change reflected further investments to build out capabilities in services, connectivity and autonomy.

Ford continues to hope for improvement in its 2019 adjusted free cash flow, led by the automotive business, and updated its guidance for full-year profitability.

Adjusted EBIT is expected to be between $7.0 and $7.5 billion, compared with$7.0 billion in 2018. The range presumes further strength in market factors and improved costs, particularly in North America, China and Europe; launch-related effects; and strength in Ford Credit.

Given the cadence of product launches and normal seasonality, the company expects fourth quarter adjusted EBIT to be higher than in the third quarter.

The updated guidance is based on the current economic environment, including the status of commodities, foreign exchange and tariffs. – all questionable or challenge-able assumptions.

Ken Zino is an auto industry veteran with global experience in print, broadcast and electronic media. He has auto testing, marketing, public relations and communications expertise garnered while working in Asia, Europe and the U.S.
View all posts by Ken Zino →
This entry was posted in auto news and tagged auto industry commentary, autoinformed.com, Ford Motor Q2, Ken Zino. Bookmark the permalink.