Chasing General Motors, Ford said it would increase its planned investments in electric and autonomous vehicles to more than $22 billion and $7 billion in turn through 2025. GM caught the industry by surprise when it said it would have 30 new EVs globally during roughly that period. It was the latest Ford attempt to appease the capital markets which remain skeptical about the lackluster performance of the Dearborn based automaker. (See AutoInformed.com on Environmental About Face – General Motors Ditching Internal Combustion Engines by 2035. Carbon Neutral by 2040?) 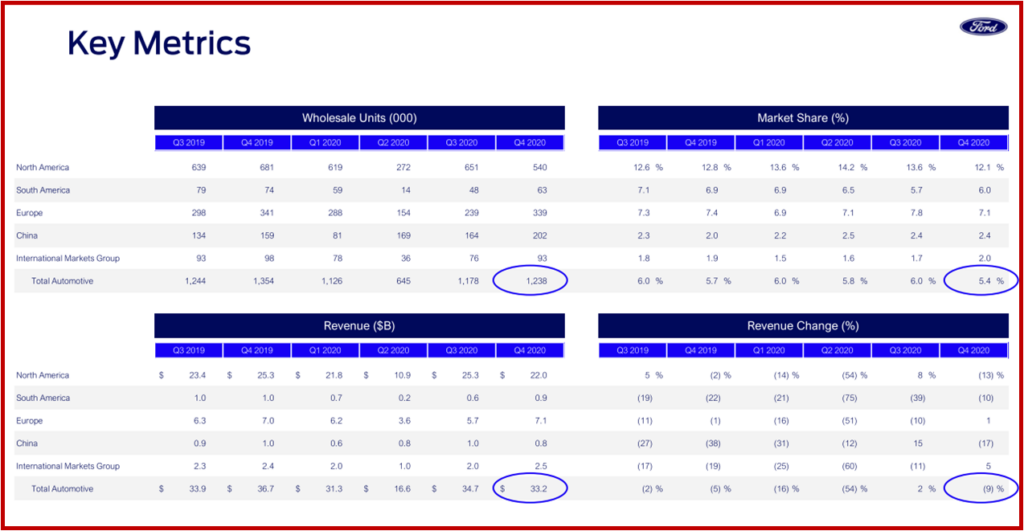 “The transformation of Ford is happening and so is our leadership of the EV revolution and development of autonomous driving,” claimed CEO Jim Farley. “We’re now allocating a combined $29 billion in capital and tremendous talent to these two areas, and bringing customers high-volume, connected electric SUVs, commercial vans and pickup trucks.”

With the exception of North America and Europe, Ford’s automobile businesses lost money in Q4 and the Full Year in every other major region – including China where the economy is thriving. Its earnings before interest and taxes (EBIT) are slight at 4.9% or adjusted a paltry 2.2% Chief Financial Officer John Lawler forecast that the automaker is on track to earn between $8 billion and $9 billion in adjusted pre-tax earnings this year.

The SEC required qualification on forward looking statements applies here as the global shortage of microchips is ongoing. Short supply of the components powering electronics in vehicles could result in a 10% to 20% production loss in the first quarter. If current estimates were projected across the first half of the year, Lawler predicted the shortage could result in an adjusted pre-tax earnings loss of between $1 billion and $2.5 billion this year. (700,000 vehicles will not be made in this quarter by major automakers says IHS Markit) Also, Ford has a bad record in smoothly introducing complex new vehicles as the botched Explorer launch illustrated.* 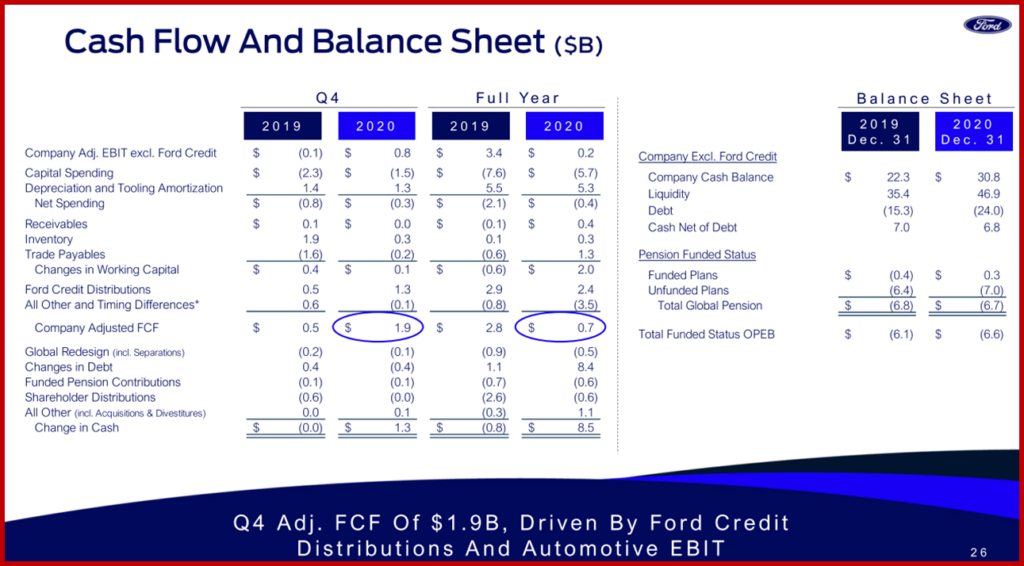 Ford says it will discuss the potentially devastating problem when it releases Q1 2021 results on April 28. Lawler said the automaker will be looking to “maximize profitability” by allocating its limited chip supply to high-margin vehicles. However, Ford admits that the shortage is having an impact on production of the F-150, Ford’s highest-volume and most-profitable vehicle. The two plants where F-150 are assembled, Dearborn Truck and Kansas City, will operate on reduced shifts next week. General Motors benefited from the shortage and the new F-150 changeover and actually picked up  1 percentage-point of market share in trucks, so to speak, in Q4.