Ford Out of Car Biz? 2019 Fusion Debuts in New York 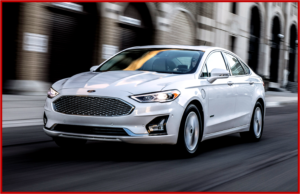 Look at the cycle plan, not past press releases for the moment.

Well it sure looks a car, one with a revised grille, fog lamps, trunk lid panel, and LED tail lamps. This new Ford Fusion about to go on public display at the New York International Auto Show this week and then production this August. Fusion is a rolling contradiction to Ford’s announcement last fall that it is vacating the car business and relocating scarce capital to becoming that emerging and rampant auto cliché – a mobility provider. Is this true? Well only partially. Cars remain a threatened species at Ford though. (See AutoInformed.com on Ford Dropping Car Business – Reallocating $7B in Capital and Ford Forms Smart Mobility Subsidiary)

What else to do when the stock is languishing  – or comatose – on Wall Street at ~$10-12 a share after eight straight years of expanding U.S. vehicle sales?

However, that’s still well short of achieving an 8% Automotive Operating Margin that is routinely obtained or surpassed by offshore automakers year in, year out. It gets worse when Ford Motor costs have grown as fast as revenue. It’s even grimmer still when capital spending has grown even faster. (GM on Flat Sales Reports Record 2017 EPS)

The Fusion, barring an intrusion of the random or repetitive quality issues that haunt the executive halls in Dearborn, has arguably one of the best combinations of standard, yes standard, driver-assist technologies among mass market brands from the original mass market automaker and  brand. These include automatic emergency braking with pedestrian detection, a blind spot information system, lane keeping (vibrates the steering wheel and can add extra steering wheel torque to help keep the car centered while the driver is texting), rear backup camera and auto high-beam lighting under the marketing name of Co-Pilot360.

Maybe Ford Motor should do a special EXIT Edition next year?

Fusion Titanium and Fusion Hybrid customers – if there are any non-truck or non-crossover buyers remaining (US Car Sales Plummet in February. Trucks Gain Again) – will purchase more technologies, including adaptive cruise control with stop and go, and an advanced navigation system, which automatically accelerates and brakes to a full stop when traffic halts, while maintaining a safe distance from the vehicle ahead.

This is a surprising revision for a mid-size car that was revised two mere years ago. And the results – absent a road test – appear surprising as well in a U.S. segment that is roughly 2 million units a year – the industries 4th largest. Ford has an 11% share.

The Fusion to watch for – possibly way out front of the performance of Euro-brand sporty cars – is the V6 Sport model with standard all-wheel drive and 380 lb.-ft. of torque, the 325-horsepower – the most powerful car in its class.

The new Fusion Energi hybrid is projected to offer an EPA-estimated electric-only range of 25 miles, about 20% more than the current model. There is a new 9.0-kilowatt-hour air-cooled lithium-ion battery offering greater energy capacity with no change to the physical size of the battery pack.

Based on data generated by more than 23,000 MyFordMobile plug-in hybrid customers over the years, Ford estimates the 2019 Fusion Energi will potentially allow up to 80% of plug-in customers to drive their typical daily commute on electricity alone, with the support of both home and workplace charging, assuming the vehicle is fully charged daily at home and at work.

Even without workplace charging, Ford estimates approximately 48% of plug-in hybrid customers could potentially get to and from their jobs on electric power alone. This estimate is based on MyFordMobile data – not Facebook – collected from more than 19 million unique trips from 23,000 Ford battery electric vehicles and plug-in hybrid electric vehicles.

Fusion V6 Sport: With standard all-wheel drive and 380 lb.-ft. of torque, the 325-horsepower is fast and reminds me of the long-forgotten Contour SVT of two decades ago. The question is have other buyers forgotten Ford cars – all of them?