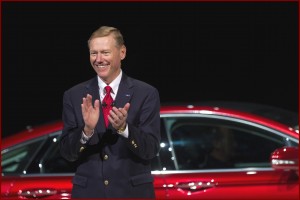 At a meeting with 2,500 dealers and employees in Amsterdam last night, senior Ford Motor executives outlined the latest European turnaround plan for its loss-making Western European operations. Not surprisingly, the plan hinges on new products, with large car, SUV and commercial vehicle segments cited as areas where growth could be profitably attained. All told, fifteen global vehicles will be on sale in Europe within five years, but the bulk of recovery plan depends on traditional European fare such as the Fiesta, Kuga, Mondeo and Transit. Some U.S.-made products will also find their way across the Atlantic Ocean, including the Edge and Mustang, but they are niche products at best and will contribute little to revenues.

Ford sales in its traditional 19 European markets decreased in July to 83,100 vehicles, or -12.3% lower than July 2011 in an industry with heavy discounting from competitors that was off 7.6% overall. Year-to-date, Ford sales were 700,200 units, down 11% compared to the same period last year against an industry decline of 7%. Both results were the lowest sales for Ford in the EU since 1995 as the Eurozone crisis continues unabated. Ford’s marketshare in Europe was 7.7% in July, and 8% ytd, basically flat. Volkswagen Group, with its formidable lineup of vehicles, has actually increased share in the EU this year to ~23%.

The effect on Ford shareholders has been negative. Ford Europe lost $404 million in the Q2, a more than $1 billion swing in results compared to Q2 2011. Ford now admits that its full year loss in Europe will exceed $1 billion. Beyond that, Ford Europe offered no financial specifics on how it will cut what is now decades of losses.

“Even with the near-term business environment, Europe presents a significant opportunity for profitable growth,” claimed Ford President and CEO Alan Mulally at what was really a pep rally. “Today, we are accelerating the introduction of our new products in Europe, leveraging our One Ford plan – with a full family of vehicles offering the very best quality, fuel efficiency, safety, smart design and value – just like we did when we transformed our business in North America.”

Well, it sounds good, but European market leader VW Group is also well underway with its own product blitz, as are other automakers. The competitive picture is further complicated by ongoing  moves down-market by traditional luxury brands – Audi, Mercedes-Benz and BMW – as they need smaller car sales to meet fuel economy and emission regulations.

Short term the new Fiesta, Europe’s best selling small car must continue to be successful this fall without using incentives Ford can’t afford. The all-new Mondeo looks to be an even riskier proposition as it attempts to move upmarket next year with a five-door, wagon and four-door, including what’s claimed to be a first-in-class gasoline hybrid electric version with a 1.0-liter EcoBoost and all-wheel drive. Remember the Scorpio, Ford’s last European attempt to move upmarket and take on German performance sedans? Few do.

There is also promised a complete redesign of Ford’s commercial vehicle range during the next two years, including a new Transit and Transit Custom this year, Transit Connect and Transit Courier next year – plus a family of new Tourneo people carriers. The European light commercial vehicle market is fiercely competitive, but if the EU eventually recovers, it could account for 4 million vehicles a year by 2017, so there’s growth potential. The new Transit will also replace the E-Series van in North America.

“The European market holds potential for profitable growth that’s clouded at the moment by the economic crisis,” said Stephen Odell, Ford of Europe Chairman and CEO. “The total European car and CV market, including Russia, is expected to grow% in the next five years to 23 million vehicles.”

The problem remains that no car company operating in Europe plans to cede sales or share, and unions have thus far thwarted long-overdue plant closings, a problem not unique to Ford.