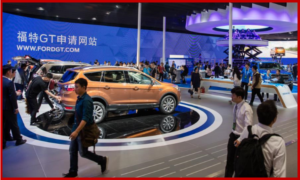 Ford Motor and its Communist-government-dictated joint ventures sold 96,450 vehicles during August in its China sales tally. This is up 22% year-over-year. Edge SUV and Focus and Escort were largely responsible for the China sales increase in the world’s largest auto market that Ford belatedly entered. Year-to-date China sales for Ford, Changan Ford (CAF) and Jiangling Motor Corporation (JMC) have reached nearly 750,000 vehicles, up 8% compared to the same time last year.

“We continue to build momentum in China on the strength of the most comprehensive and exciting Ford lineup we have ever offered Chinese customers,” said Peter Fleet, vice president of Marketing, Sales and Service, Asia Pacific, and apparently a chief cliché engineer. “Our new product surge continues this month with the launch of the new Kuga SUV with SYNC 3.”

Sales of small vehicles helped, with the new for China Ford Focus up 92%. Sales of the Ford Escort are up 49% compared to August 2015. The Ford Edge was another leader for Ford, with year-to-date sales up more than three-fold. The Taurus, Ford’s flagship sedan, also continues to gain the share in non-premium large sedan segment in China.

Ken Zino is an auto industry veteran with global experience in print, broadcast and electronic media. He has auto testing, marketing, public relations and communications expertise garnered while working in Asia, Europe and the U.S.
View all posts by Ken Zino →
This entry was posted in sales and tagged autoinformed, autoinformed.com, ford china sales, Ken Zino. Bookmark the permalink.