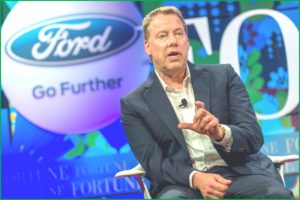 Not an easy but an abundantly paid job.

One shareholder proposal is familiar and longstanding – one share, one vote, which would end the Ford family’s control – 116 years of involvement – of the company under the current structure and full control that dates to the 1950s. Ford Family shares have 36 votes (16 votes by some tallies) per share compared to the one-vote per share for regular shareholders.

Of more significance in these highly politicized times are calls for information about political groups and causes supported that are working to subvert greenhouse gas and emission control regulations. Not surprisingly the family and management are against such transparency saying they are against the interest of all shareholders.

Another proposal, #6 from The Unitarian Universalist Association, seeks transparency on Ford Motor’s direct and indirect lobbying activities and expenditures “to assess whether Ford’s lobbying is consistent with its expressed goals and in the best interests of shareholders,” at the national, state and local levels.

There is some substance here: Ford spent $2,445,024 on lobbying in California from 2010 – 2016. Ford’s lobbying over fuel efficiency standards has attracted media attention (‘‘EPA Chief Pruitt Met with Many Corporate Execs, Then He Made Decisions in Their Favor.’’ Washington Post, September 23, 2017). Ford sits on the boards of the Chamber of Commerce, which has spent more than $1.3 billion on lobbying since 1998, and the National Association of Manufacturers, which spent over $25 million lobbying in 2015 and 2016.

Ford does not disclose its memberships in and payments to trade associations, or the amounts used for lobbying. A shareholder group says Ford’s lack of trade association lobbying disclosure presents significant reputational risk. “Ford believes climate change is real and is committed to reducing greenhouse gas emissions, yet the Chamber has consistently opposed legislation and regulation to address climate change.”

The Ford Board recommends a vote Against this Proposal 6 “because it is not in the best interests of Ford and you. Corporations are prohibited under federal and many state laws from making direct or indirect contributions to candidates or political parties. The Company has a policy not to make contributions to political candidates or organizations, nor to employ its resources for helping to elect candidates to public office, even where permitted by law.”

Ford does make contributions with respect to state and local ballot questions and referenda that have a direct impact on the Company’s business (say, local taxes). Information with respect to contributions made in connection with ballot questions  is publicly available through local boards of election. “We do not believe that the additional information requested by the proposal will add significant value for shareholders,” claims Ford.

Another proposal – from As You Sow – notes correctly that Global action on climate change is accelerating. The Paris Agreement’s goal of keeping global temperature rise below 2 degrees Celsius is already shaping global, national, and local policy decisions. Transportation accounts for more than 23% of global carbon dioxide emissions; this sector will need to deliver major emissions cuts for countries to achieve the Paris goal. (WEO 2017).

Sow notes that in the U.S., a recent study (http://ns.umich.edu/new/releases/25157-beyond-epa-s-clean-power-decision-climate-action-window-could-close-as-early-as-2023) found that greenhouse gas (GHG) reductions beyond those achievable from current vehicle emission reduction standards will be necessary by 2025 to meet global climate goals.

It’s true that, governments moving toward transportation policies requiring significant fuel economy increases and are beginning to promote low carbon vehicle technology standards. (China claims it will require 40% of cars sold by 2030 to be electric and intends to ban vehicles with internal combustion engines but, significant but it has not published any regulations supporting this. trumps claim that global warming is a Chinese hoax appears belied here.). “Other countries and cities have announced, and California is considering, similar measures,” observes SOW.

There appears to be a lot of blue – or is that Green? – sky from automakers here contrary to current buyer behaviors. Automakers are announcing plans for de-carbonizing transportation. Chinese owned Volvo claims that by 2019 all new models will be electrified, hybrids count, and it will sell 1 million electric vehicles (EVs) cumulatively by 2025. BMW promises to sell 100,000 electrified vehicles in 2017 and that 20-25% percent of its sales will be plug-in-hybrids or EVs by 2025.

Herein lies the potential hypocrisy problem: In 2012, the U.S. issued light duty vehicle rules strengthening GHG emission reduction standards and improving corporate average fuel economy. These rules – made working with automakers – are being challenged by Ford and other automakers.

Ford has announced a significant re-allocation of capital from cars to trucks and sport utility vehicles, in keeping with current market demands and Ford’s limited financial resources. This might a move increase fleetwide GHG emissions. To be an un-Fox-like fair here, Ford also announced it will expand electric vehicle development with no sales estimate – a prudent move in an automaker p.r. environment that apparently has more chanting drunks than at a NFL game.

Sow claims that “coupled with lobbying to weaken CAFE standards, this new plan raises serious questions about whether the company will retreat in reducing fleetwide GHG emissions, especially through 2025, a critical window of opportunity for the industry to meet climate goals.”

This uncertainty – allegedly and debatable says AutoInformed –  exposes the company to “reputation harm, public controversy, and the potential to quickly lose global competitiveness.” Sow shareholders request that “Ford, with Board oversight, publish a report, at reasonable cost, describing whether and how our company’s fleet GHG emissions through 2025 will increase given its planned changed in fleet mix and industry’s proposed weakening of CAFE standards or, conversely, how it plans to retain emissions consistent with, or better than, CAFE standards to ensure its products are sustainability in a rapidly de-carbonizing vehicle market.”

***For the second year, Ford will conduct its annual meeting of shareholders in a virtual format. The Virtual Annual Meeting will take place at 8:30 a.m. EDT on Thursday, May 10, enabling shareholders to listen, vote and submit questions virtually by logging in at www.virtualshareholdermeeting.com/FORD2018.