Ford Q3 Income, Profits Down as Volume Increases. No Dividend Yet, But Sooner Rather than Later Promised 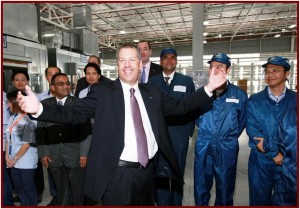 There’s really not much to smile about with a $73 million swing to a Q3 loss of $44 million in Asia Pacific and Africa compared to last year.

Ford generated positive automotive operating-related cash flow of $400 million in the third quarter, but its total operating margin was only 4.8%. Ford claimed the results were “solid” given the uncertain business environment it is operating under.

Ford – in spite of media speculation – did not announce a dividend, which was suspended in September of 2006 as it faced a financial implosion, which was headed off by heavy borrowing before the collapse of the global financial markets sent General Motors and Chrysler into bankruptcy. CFO Lewis Booth said that the company intended to reinstate the dividend sooner rather than later, but he had nothing to further to say. (See Ford Common Stock Dividend Coming Next Year? )

Ford continues to struggle globally by posting losses in moribund European economies, and – surprisingly – the growth markets of Asia Pacific and Africa, where it invested late, favoring excursions in the funding of large trucks and SUVs in the U.S. Ford in North America, where Japanese competitors have been out of the market since the March earthquake and tsunami disrupted production, and South America reported pre-tax profits for Q3. The absence of the Japanese in North America allowed Ford to increase its revenue per car by cutting incentives and increasing prices, which caused a gain of $700 million compared to Q3 2010. This artificial boost will not last as Japanese production has now resumed.

As a result, Ford Q3 2011 pre-tax operating profit was $1.9 billion, or 46 cents per share, a decrease of in earnings of $111 million, or 2 cents per share, from Q3 2010. Ford’s third quarter net income was affected once again by unfavorable special items, this time of $98 million. The special items include personnel reduction actions, Mercury and other dealer-related actions in North America.

Debt – at $12.7 billion – remains problematic for the “junk bond” rated automaker. However, Ford decreased automotive debt by$1.3 billion in the third quarter. This included payment of the remaining $1.8 billion balance of secured Term Loan debt, which was offset partially by an increase in controversial taxpayer-subsidized low-cost loans from the Department of Energy ($5.9 billion) to support advanced technology under the guise of retooling existing plants.

As Ford reported with first and second quarter results, quality remains mixed due to what Ford calls “some near-term issues” in North America, which Ford claims to be addressing. (See Chrysler Up, GM Sideways, Ford Down in Consumer Reports Annual Reliability Survey Revealed Today at APA in Detroit and FrankenFord Monster Loose In “Deerbern” Terrorizing Peasants and Threatening Public Safety On the Roads)