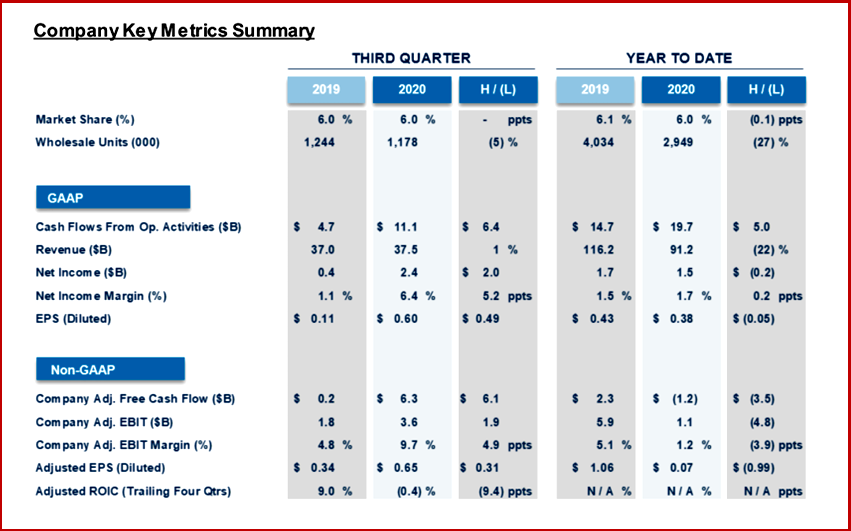 “We haven’t suddenly fixed the issues in our automotive business…

Ford Motor Company posted modest Q3 results after the market closed yesterday that continued to reflect the underlying weakness of the business compounded by ongoing negative effects of the Covid pandemic. The positives in Q3 – $2.4 billion in net income and 6.4% net income margin, on revenue of $37.5 billion were also areas of potential negatives in Q4 as Covid reappears in North America.

“We haven’t suddenly fixed the issues in our automotive business, but we have a clear turnaround plan to get that done,” said Jim Farley, Ford’s president and CEO. “That work is underway and we’re making progress.”

The latest plan among many, which Farley outlined on 1 October 2020, his first day as president and CEO, includes familiar platitudes:

Ford generated $6.3 billion in adjusted free cash flow during the third quarter, helped, as expected, by a $4 billion rebuild of supplier payables as vehicle production reached pre-pandemic levels. The company ended the period with cash of nearly $30 billion and total liquidity of more than $45 billion after fully repaying $15 billion in revolving credit drawn down in Q1 to maintain financial flexibility in the early days of the pandemic. (Ford Motor Maxes Out Lines of Credit)

In the upcoming fourth quarter, Ford is launching the next three all-new vehicles: F-150, including a hybrid electric-powered version. This means a huge loss in profits as the changeover takes place. Ford’s recent track record of failed product launches needs to be turned around.

Bronco Sport, ahead of the return of the full-size Bronco next year; and the all-electric Mustang Mach-E.

The three vehicles are now in production, but a stark warning comes from Europe in Q3 where a supplier problem and costly fix on the Kuga. Ford’s Europe under its latest restructuring program, with a cumulative $1 billion reduction in structural costs since 2018 would have been profitable in the third quarter excluding effects associated with an unspecified supplier-quality issue with the new Kuga plug-in hybrid electric vehicle, among them the expense for CO2 pooling to comply with European emissions regulations.

Farley said electric vehicles are fundamental to the company’s future across its lineup – including in commercial vehicles, and the Lincoln line. Ford will reveal a new, all-electric Transit van for global markets in November.

Wholesale product shipments in China were up 22% as the company’s mix of SUVs increased 13 points, to 36%. That was driven by locally built versions of the Explorer, Escape, and the luxury Lincoln Aviator and Corsair, and represented the third quarter in a row of year- over-year gains in market share. The third quarter also was the second straight of EBIT improvement.

In South America, Ford posted its fourth straight year-over-year improvement in quarterly EBIT, with pricing increases and cost reductions helping to mitigate pressures from inflation and currency. The International Markets Group was profitable despite pandemic-related industry declines in vehicle shipments.