Posted on 9 December 2011 by Kenneth Zino 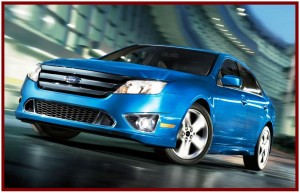 Ford handling is better with the wheels attached.

Ford Motor Company is recalling Fusion and Mercury Milan sedans from the 2010 and 2011 model years because the wheels fall off during driving. Almost 130,000 of Ford’s most popular sedan are affected by the safety defect. A stop sale or stop demonstrating the cars is now in place at Ford dealerships until the vehicles are inspected and all of the lug nuts replaced.

NHTSA started the Ford wheel defect investigation in January of this year based on complaints from Ford owners, and upgraded it to an engineering analysis in July.

It appears that NHTSA forced the Ford recall after a meeting early in November as complaints continued. Two root causes for the latest Ford safety recall were listed in the required NHTSA documentation: Hayes supplied steel wheels could be defective; and so could Mexican-built Brembo disc brake rotors.