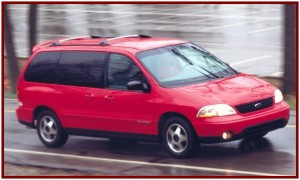 The supplier, Dana, did not properly corrosion protect the front suspension parts.

Ford Motor Company is recalling 1999 to 2003 model Windstar minivans because the steering can fail after the front suspension rusts away. More than 425,000 of the Canadian-built Windstar minivans are prone to rusting problems.

Many of the Windstar minivans affected are also part of a rear axle corrosion recall on 600,000 Windstars last year where there is at least one fatality. The National Highway Traffic Safety Administration is continuing its investigation of Ford corrosion problems.

Critics of such regional recalls say they do not properly inspect or repair all of the potentially defective vehicles, jeopardizing safety over a known defect. Automakers use regional recalls to hold down the costs of complying with U.S. regulations. Ford did not issue a news release about its latest safety defect.

The Windstar rust issue causes fractures of the front, lower-control-arm rear attaching brackets, as well as the body mount attachments at the rear of the front sub-frame. Ford said in the required filing with NHTSA that “while we have not concluded that the low rate of reported incidents on these older vehicles rises to the level of a safety defect, we are taking this action to confirm our commitment to safety and to address any potential vehicle owner concerns.”

Owners will be asked to take their vehicle to a Ford or Lincoln/Mercury dealer for an inspection. If the vehicle passes corrosion inspection, owners will then be asked to return for installation of reinforcement brackets to extend the front sub-frame durability.

Owners of vehicles that do not pass inspection, but can be repaired, will be offered alternative transportation until parts become available In some cases where reinforcement brackets cannot repair a vehicle, a repurchase offer will be made.

Ford said that parts will be available in limited quantities in early March.

NHTSA opened an engineering investigation last July into the Windstar rust problem. Ford now says that Dana, the supplier of the front sub-frame did not consistently complete the phosphate coating process prior to applying corrosion protection on the parts.