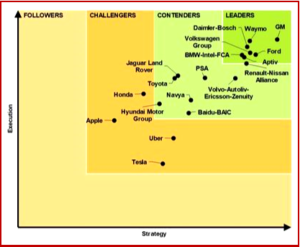 The race is on but favorites and winners have yet to emerge. Click to Enlarge.

Right after the announcement that NHTSA has asked SAE to develop guidelines for the safe development and use of upcoming self-driving vehicles, Ford Motor has released a report that outlines its approach to autonomous vehicle development. (See AutoInformed.com on SAE to Administer Autonomous Testing Program*)

The 44-page document, titled “A Matter of Trust,” details Ford’s “prioritization of safety” during self-driving vehicle development, as well as how the company is working with industry and government, and how it is applying the technology to solve the challenges our cities face. It’s partly technical but looks to be largely a marketing document design to sell self-driving vehicles to potential buyers.

Ford is on record saying that it will have self-driving vehicles on the road by 2021. If so that would make Ford a leader along with Google  in the new, and controversial techno approach to automobility.

There is no doubt that radical changes are coming in transportation. It’s just a question of where, when and who pays. The United Nations has identified increasing urbanization as one of the defining trends of the 21st century, for whatever that is worth. Trends are troubling. Cities are growing. With urban centers dealing with record levels of traffic and pollution. The old solution – build more roads – won’t cut it. Most U.S. infrastructure was built to meet the needs of individual vehicles.

However, most vehicles sit idle about 95% of the time. Because of this, as much as 30% of the real estate in city centers is devoted to parking. Ford notes that this growth is also causing a shift from individual vehicle ownership to the use of shared mobility options such as ride-hailing services.

Ford has created a City Solutions team to work with cities and communities to address these challenges. Ford claims to be developing” a portfolio of solutions that can help a city improve its transportation system through better orchestration of traffic, transit and the ever-growing mobility options emerging every day.”

Initially, Ford – along with many automakers – thinks self-driving vehicles will work best in a different business model: one where vehicles are accessed and shared versus owned and driven. They will operate as part of a mobility service accessed through a smartphone app for either moving people or delivering goods.

The program is long, long overdue with Google and automakers such as Daimler, GM, Ford and FCA – among others – are well underway to turning loose on the untrained public semi-automated and fully automated vehicles. Waymo – the Google driverless car will be in service in Arizona this fall. Apple is expanding its fleet of driverless vehicles in California.