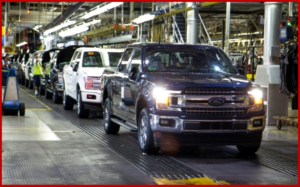 Ford recovered, repaired and validated most dies at the Eaton Rapids facility.

Ford Motor Company is restarting production of its most profitable vehicle – the F-150 pickup truck – at Dearborn Truck Plant Friday after about one week of downtime.

The company declined to say how many vehicles weren’t built because the lost production is still unknown until everything is back up and running. Inventories of the best-selling F-Series pickups and other vehicles are adequate. Customers shouldn’t have a problem “finding the model they want,” said Ford. (F-Series Supplier Fire – a Threat to Ford Motor Profitability)

Ford also said it successfully repaired the supply chain for Super Duty, with production targeted to restart by Monday at the Kentucky Truck Plant as well as the Kansas City Assembly Plant that also makes F-150 pickups. This crisis intervention comes after the May 2 fire at the Meridian Magnesium Products facility in Eaton Rapids, Mich.

“While the situation remains extremely dynamic, our teams are focused on returning our plants to full production as fast as possible,” said Joe Hinrichs, Ford president, Global Operations. “The ramp-up time to full production is improving every day.”

Ford teams, together with suppliers including construction management from Walbridge and other contractors, worked long hours to get America’s best-selling vehicle back on line as quickly as possible. The teams removed 19 dies from Meridian’s badly damaged facility, and in one case, moved an 87,000-pound die from Eaton Rapids, Mich., to Nottingham, U.K., via an Antonov cargo plane – one of the largest in the world – in just 30 hours door-to-door. (A die is a tool used to cut or shape material using a press.)

“Thanks to heroic efforts, we are resuming production of some of our most important vehicles ahead of our original targets,” said Hau Thai-Tang, Ford’s executive vice president of Product Development and Purchasing.

Work started immediately in the aftermath of the fire. Teams removed and remediated safety concerns – including dangling siding – and restored electricity, gaining approval to access the site while debris still smoldered inside. This allowed Ford and Meridian to safely retrieve and relocate tools to more quickly resume part production and work to minimize the financial impact of the stalled plants.

Ford recovered, repaired and validated most dies that were at the Eaton Rapids facility, and Meridian is now producing parts for the F-150 at two locations – Eaton Rapids and Nottingham, U.K. Production of bolsters for the Super Duty is also restarting at the Eaton Rapids plant. Under normal circumstances, moving tooling the size of a bolster die would take approximately 10 days just to get the proper import and export approvals. However, Ford and its suppliers managed to cut the total time for the entire move to 30 hours, including trans-Atlantic flight time.

When the team removed the die from the Eaton Rapids factory, it was shipped to Rickenbacker International Airport in Columbus, Ohio. Rickenbacker had both the capacity to handle such a large piece of equipment and allowed an Antonov An-124 Russian plane, one of the largest planes in the world – typically used to transport trains, dump trucks and even a 25-foot sea yacht – to take off as soon as the equipment was loaded. Nearly 4,000 miles away, a team in Nottingham was waiting to receive the die and take it to Meridian’s nearby factory. In between, the Ford team received a U.K. import license for the die – a mere two hours before the plane touched down. Parts produced at Nottingham are being shipped via daily flights on a Boeing 747 jet until production in Eaton Rapids returns to pre-fire levels.