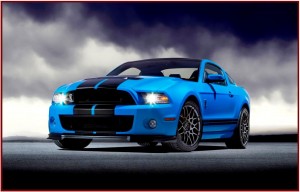 The Camaro versus Mustang war continues. Ford has thus far ignored a standing GM challenge that the Camaro ZL1 can out run it on a track.

Ford is boasting that the ultimate Ford Mustang – Shelby GT500 – will offer the highest horsepower production V8 when the new 2013 model goes on sale next year. The 5.8-liter V8 aluminum-block supercharged engine is claimed to be rated at 650 horsepower and 600 lb.-ft. of torque. The heavy 3,850-pound car also will be exempt from the gas-guzzler tax, a Ford p.r. claim that awaits EPA certification. We’ll skip the debate here about how socially responsible this type of street legal car is.

“It might just seem like we’re putting a bigger engine into the car. But it’s been a balanced approach through and through,” said Jamal Hameedi, SVT chief engineer. “We’ve completely redone the car to be even more sophisticated in terms of handling and control than the prior model.” 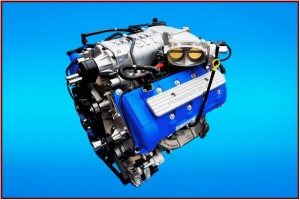 With electronic controls the buyer will never experience full power unless conditions are optimal, and even then it depends on the sophistication of the calibration. Independent testing will, eventually, reveal how fast the Mustang really is.

The 2013 Shelby GT500 offers two new sets of forged-aluminum wheels including a unique wheel for cars with the optional packages. The 19-inch front and 20-inch rear wheels are coupled with Goodyear Eagle F1 Supercar G:2 tires on all vehicle configurations.

Available as part of the optional Performance Package, Bilstein electronic adjustable dampers are controlled by a button on the instrument panel. Normal mode gives what’s said to be a more comfortable ride over rough pavement. Sport mode is a performance calibration, delivering improved response time on the track it’s claimed and less body roll while cornering and pitch under braking.