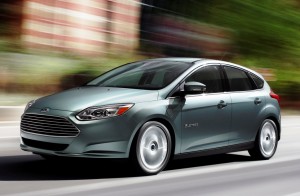 Ford is joining the EV parade with a conservative strategy that limits both the up and downsides of what remain controversial vehicles.

Ford Motor Company unveiled in Las Vegas today its conversion of the Focus compact car to an electric vehicle. It was the first time a major automaker unveiled a new car at the Consumer Electronics Show.
Ford claimed the Focus EV will “offer enough range to cover the majority of daily driving habits of Americans. It will offer a mile-per-gallon equivalent better than Chevrolet Volt and competitive with other battery electric vehicles.” (See Chevy Volt has MPGe Rating of 93, 37 MPG Combined)

The claims made during the debut do not bode well for consumers who skeptically view promises made by the auto and electronics industries. No meaningful technical specifications were provided other than the Focus EV will take less time to recharge than the Nissan Leaf that just went on sale.

The lack of specifics means that this Focus EV is likely a run of the mill electric vehicle that leaves your driveway with the same range as a gasoline-powered Ford Focus does when its low fuel warning light is on – 40 or so miles before the car is as dead as road kill during a Michigan winter in the upper peninsula.

Ford, late to the government subsidized EV parade, is likely hoping for the equivalent of the “Hail Mary” pass in football – a battery breakthrough for the Focus EV’s 23 kWh lithium-ion battery pack by the time it launches in very small numbers late this year initially in Washington, D.C. and then 14 states. Focus uses a Korean battery pack from LG Chem and has a top speed of 84 mph. At current price the batery pack alone is worth $20,000.

The Chevrolet Volt has a significant advantage over such pure EVs, since Volt’s onboard gasoline engine can keep it going for 300 miles after the battery dies after 40 miles or so. The Volt is also dependent on Korean battery technology that has been subsidized by U.S. taxpayers. (See General Motors Licenses Argonne Developed Battery Technology. Taxpayers Are Also Subsidizing the Koreans!)

The Focus EV is five-door hatchback that comes from Ford’s latest C-car platform, which was teased at the Paris Motor Show last September. Both Focus gasoline and electric variants will be sold in North America and built at Ford’s Michigan Assembly Plant in Wayne. Magna, the Canadian auto parts supplier, will actually do the conversion in the plant.

Where the Focus Electric will be converted for European markets and by what company is currently being analyzed.

The Focus Electric is one of five new electrified vehicles included in Ford’s electrification strategy. Initial deliveries of Transit Connect Electric began in North America at the end of last year and the vehicle will be launched in Europe later in 2011.

Electric cars, such as the Nissan Leaf and Focus EV, and hybrids with new larger battery packs, including the one in the Volt, present rating problems to U.S. federal regulators already under criticism for previous dubious mileage numbers that the automakers posted on window stickers. The Chevrolet Volt operates using electricity stored in its 16-kWh lithium-ion battery pack. Leaf’s is 24-kWh.

The Environmental Protection Agency approved Leaf label, claims that the $32,000 five-passenger car is best-in-class with a mile per gallon equivalent (MPGe) of 106 city, 92 highway or a combined 99 MPGe. The Leaf’s annual electric cost, using 12 cents a kilowatt-hour for the label, is $561, a number far below those of the most fuel efficient gasoline powered cars or hybrids. (See EPA Says Nissan Leaf Gets 106 MPGe and Chevy Volt has MPGe Rating of 93, 37 MPG Combined)

This calculation is based on the EPA’s formula of 33.7 kWh being equivalent to one gallon of gasoline energy, and does not take into account for emission purposes how the electricity is generated.