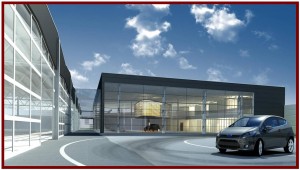 The project is the largest single expansion of the Design Center since it was first constructed in 1968.

Work on an €11.6 million expansion of Ford’s Design Center in Cologne-Merkenich officially began this week with the laying of a cornerstone by Cologne Lord Mayor Jürgen Roters, Ford of Germany Chairman Bernhard Mattes, and Martin Smith, Executive Director, Design, Ford of Europe. The Cologne Design Center expansion will add 100 workspaces when it is completed at the end of 2011.

The expansion includes a new 3,000-square-meter facility with two floors. The new building will be equipped with a new “powerwall” capable of projecting vehicle and concept designs in a three-dimensional and virtual environment.

The Ford Fiesta and the Ford Focus are not only manufactured in Germany, but are mainly designed and engineered in Cologne, one of several of Ford’s engineering locations that include the United Kingdom, United States, Australia and China.

The project also includes a redesign of the existing design studios, plus the installation of new milling machines that use computer-aided design to create precise clay models of new vehicle designs.

“This is an important expansion of the Ford Design Center as Cologne-Merkenich has the global lead on the design and development of Ford’s small and compact vehicles,” Mattes said. “We are delighted that the Cologne Design and Engineering Center is playing such an important part in Ford’s future and is an integral part of our global One Ford strategy.”

The building project is the largest single expansion of the Design Center since it was first constructed in 1968.  Today, the Design Center covers a total of 13,000 square meters, and includes an aerodynamic wind tunnel built in 1984.

The Design Center provides space for a total of 250 employees from 14 nations. In addition, a team of about 70 designers, responsible for Ford of Europe’s commercial vehicle design, is located at Dunton Technical Center in Essex, UK for commercial vehicle development and Ford Powertrain.