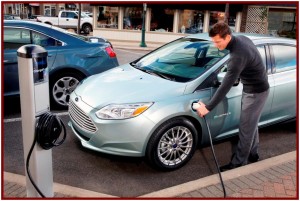 Another lesson in "Green Math" versus arithmetic is about to be conducted in the marketplace.

Ford is now taking “reservations” for the 2012 Ford Focus Electric with a price starting at $39,995, before any federal or local taxpayer subsidies. No lease is available, so a typical payment to buy – with $4,000 down for 48 months – is almost $800 per month at Ford’s 7% interest rate. The gasoline fueled Focus starts at just over $17,000.

This means that the sales volume of the EV will likely be limited to a few enthusiasts. And Focus Electric also faces tough competition from the Nissan Leaf, which can be leased for about $400 a month.  (See Ford Shows 2012 Focus Electric Vehicle at Consumer Electronics Show. 2012 Debut for Magna Conversion )

A limited number of Focus Electric models will first be available in California and the New York metropolitan area. Availability of Focus Electric will expand next year to the remaining 15 launch markets as production expands. The Focus electric will also go on sale in Europe next year, a potentially bigger, albeit still small market. (See Chevrolet and Nissan Succeed with Plug-in Hybrids and EVs as the Business of Plugging In Shows First Product Results)

The Focus Electric is a conventional EV, at least as far as they exist right now. The conversion removes the powertrain and substitutes a 23 KwH lithium ion battery pack (~$20,000), a single speed transmission and a 92-kW electric motor. The battery pack uses liquid-cooling to help increase life. Top speed is limited to 84 mph, and range is said to be 50-80 miles, a claim I haven’t tested, although this is consistent the Nissan Leaf models that I have driven.

The Focus Electric’s battery can be recharged in just over three hours using an optional 240-volt charging station (~$2,000 depending on local building codes and electric service). This is about half the charging time of the 2012 Nissan Leaf, which year-to-date has tallied sales of roughly 8,000 units. Drivers also can top off the battery if they have 8-12 hours using any standard 120-volt outlet with the included charging cord. (See also $10,000 Solar Panel Option Coming for Focus Electric Vehicle. Ford is using the new “Green Math” to Calculate Benefits)

The Chevrolet Volt (and other hybrids) has a significant advantage over such pure EVs, since Volt’s onboard gasoline engine can keep it going for 300 miles after the battery dies after 50 miles or so.

However, year-to-date in the U.S. hybrid sales are down, as they do not make economic sense at less than $5 (or more) a gallon for gasoline. The Volt, 5,000 sold ytd, is also dependent on Korean battery technology that has been subsidized by U.S. taxpayers. (See General Motors Licenses Argonne Developed Battery Technology. Taxpayers Are Also Subsidizing the Koreans!).

Toyota Prius remains the clear market leader for hybrids in the US. as well as the rest of the world, with the Honda Insight a credible alternate choice. (See Driving the 2012 Toyota Prius V – Another Hybrid Benchmark, 2012 Honda Insight Hybrid Ups Fuel Economy at Under $20,000 and Toyota Prices 2012 Prius Plug-in Hybrid at $32,760 and $40,285)