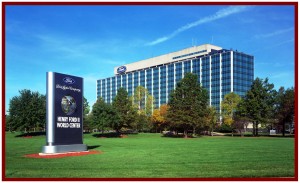 Ford reduced automotive debt by $14.5 billion in 2010, but still has another $14 billion to go. Ford can't afford to take a strike. And the UAW- whether or not locals realize this - can't afford to strike Ford.

Late last night the UAW said it would now concentrate on resolving its expired Ford UAW contract for its 41,000 dues paying members. Earlier this week, local leaders endorsed a tentative GM UAW contract and sent it on to their more than 48,000 members for an expected, but by no means certain, ratification during voting this week and next. The other expired contract at Fiat-controlled Chrysler has been extended through 19 October.

Speculation has it that the UAW is having trouble reaching an agreement with Chrysler, and that a Ford UAW deal provides a better chance for a more lucrative settlement at this time.

“…I can tell you that our negotiators have already been working hard in subcommittee meetings and they are anxious, as am I to begin intense discussions with the company and work towards a tentative agreement…,” said in part a posting on Facebook by Jimmy Settles, Vice President/Director of the UAW National Ford Department.

If the GM UAW contract sets the pattern, as it has in the past, a combination of job creation and increased pay for new union hires (the shrinking UAW desperately needs the revenues) will occur and signing bonuses will be given to existing workers under a new Ford UAW deal. However, the contentious two-tier wage system that brings in new hires at much less than the pay of existing workers will remain. (See GM UAW Contract Offers Profit Sharing, Some New Jobs)

At Ford Motor the UAW can strike, since Ford did not accept bailout funds and hence is without the “no strike” provisions in place at GM and Chrysler, which was part of the conditions of the unpopular taxpayer-financed bailouts of the bankrupt companies in 2009. This potentially gives the UAW more leverage than it has at Fiat-controlled Chrysler. Ford with $14 billion in debt clearly does not need what would be a ruinous loss of revenue. And longer term, Ford cannot be the highest cost producer among the Detroit Three. A resurgent General Motors has recently been limiting Ford’s sales gains as the U.S. auto market slowly recovers.

Insiders say Ford absolutely will not accept higher costs than those at GM and Chrysler – setting up a potentially bitter confrontation, which if it drags on too long may escape national union control. Two years ago UAW Ford members – by a large margin – rejected cost cutting concessions to match those granted then at GM.

At Chrysler last week, CEO Sergio Marchionne, released a letter that expressed impatience with UAW president Bob King over the lack of a settlement as the contract expired. Marchionne noted that Fiat is in the midst of investing $4 billion dollars in the U.S. without know the outcome of the Chrysler UAW contract. He said he did not want to see the old adversarial ways reappear. Marchionne also said there were only a few unresolved issues “primarily involving the economics for our employees during the next four years.”

No surprise here that it is all about the money. Ford Motor made $6.6 billion last year. As a result CEO Alan Mulally received $26.5 million in compensation. Doesn’t sound like he needs a new contract…