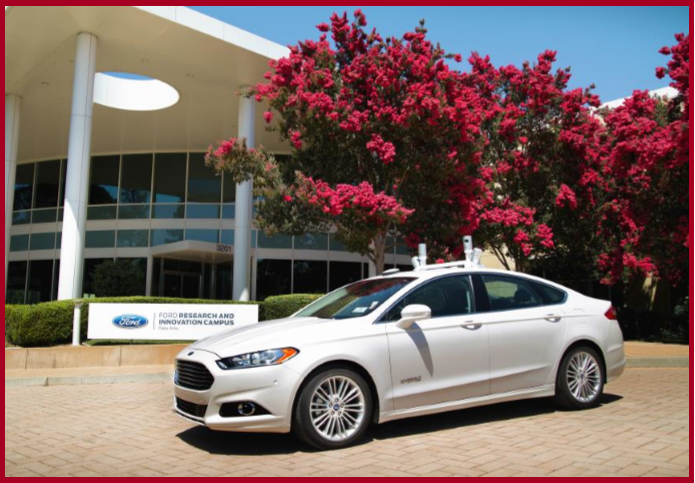 Ford Motor wants a high-volume, fully autonomous SAE level 4-capable vehicle in commercial operation in 2021 for a ride-hailing or ride-sharing service. The car will lack a steering wheel or gas and brake pedals. It is being specifically designed for commercial mobility services, such as ride-sharing or ride-hailing, and will be available in high volumes. Ford is investing in or collaborating with four startups to enhance its autonomous vehicle development. (See Society of Automotive Engineers-rated level 4-capable vehicle)

“The next decade will be defined by automation of the automobile, and we see autonomous vehicles as having as significant an impact on society as Ford’s moving assembly line did 100 years ago,” said Mark Fields, Ford president and CEO.

This year, Ford will triple its autonomous vehicle test fleet to be the largest test fleet of any automaker – bringing the number to about 30 self-driving Fusion Hybrid sedans on the roads in California, Arizona and Michigan, with plans to triple it again next year.

To deliver an autonomous vehicle in 2021, Ford is making four key investments and collaborations that are expanding its research in advanced algorithms, 3D mapping, LiDAR, and radar and camera sensors:

Silicon Valley expansion
Ford is expanding its Silicon Valley operations, creating a dedicated campus in Palo Alto. It is adding two new buildings and 150,000 square feet of work and lab space adjacent to the current Research and Innovation Center. This supports plans to double the size of the Palo Alto team by the end of 2017.

Ken Zino is an auto industry veteran with global experience in print, broadcast and electronic media. He has auto testing, marketing, public relations and communications expertise garnered while working in Asia, Europe and the U.S.
View all posts by Ken Zino →
This entry was posted in news analysis, transportation and tagged autoinformed.com, Ken Zino, ride sharing. Bookmark the permalink.