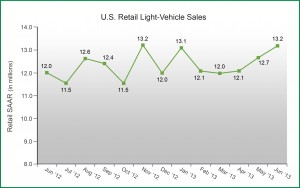 The Federal Reserve keeps printing money, easing credit, which along with aging vehicles bolsters demand even though the overall economy for working people remains depressed.

Unfortunately for buyers, the strong selling rate is matched by strong transaction prices. Thus far, in June, the average transaction price of new vehicles is $28,900, the highest ever for the month, according to J.D. Power, the source of the data.

While sales overall are strong, not all segments are selling at the same pace. Sales of premium vehicles account for just 11.7% of new-vehicle retail sales thus far in June, down from 12.9% in June 2012. Slowing sales of premium vehicles is largely due to the age of the models in these segments. Power calculates that the average age—the number of months the vehicle has been in the market since it was introduced or redesigned—of premium models sold in the second quarter of 2013 was 43 months. In comparison, the average age of non-premium models, excluding pickup trucks where the seven-year-old Chevrolet Silverado and GMC Sierra are large factors, only 34.5 months.

Power predicts that by the second quarter of 2014, the average age of premium products will fall to just 33 months, as new and redesigned products enter the marketplace. AutoInformed notes that the new Mercedes S-class and E-class as significant players in this segment going forward

“Although the premium segment growth has lagged non-premium, there is some good news for the industry in that the average price of premium vehicles in June is $47,000, up almost 4% from June 2012,” said John Humphrey, at Power. “New premium vehicles entering the market late this year will also help bolster sales through the second quarter of 2014.”

North American light-vehicle production through June increased almost 5%, compared with the same period in 2012. Ford’s 16% percent increase in production thus far in 2013 is leading all manufacturers, with a significant portion of its increase driven by sales boosts for the new Escape and Fusion, as well as its F-Series pickups.

Ken Zino is an auto industry veteran with global experience in print, broadcast and electronic media. He has auto testing, marketing, public relations and communications expertise garnered while working in Asia, Europe and the U.S.
View all posts by Kenneth Zino →
This entry was posted in auto news, sales and tagged autoinformed, autoinformed.com, j.d power, june 2013 sales, Ken Zino. Bookmark the permalink.