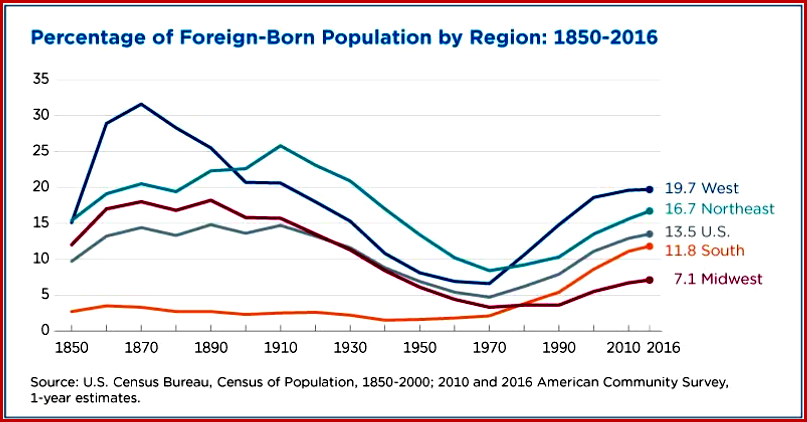 The number of foreign-born* residents in the United States has varied over the past 165 years. By 2016, 13.5% of the U.S. population was foreign-born, a level that rivaled historic highs, according to the U.S. Census Bureau.

What has changed over time is who the foreign-born are and where they have dispersed across the country, according to U.S. Census Bureau research.

The share who were foreign-born declined across all regions in the decades after the 1920 Census. Policies restricting the inflow and permanent settlement of the foreign-born as well as the Great Depression were major factors. 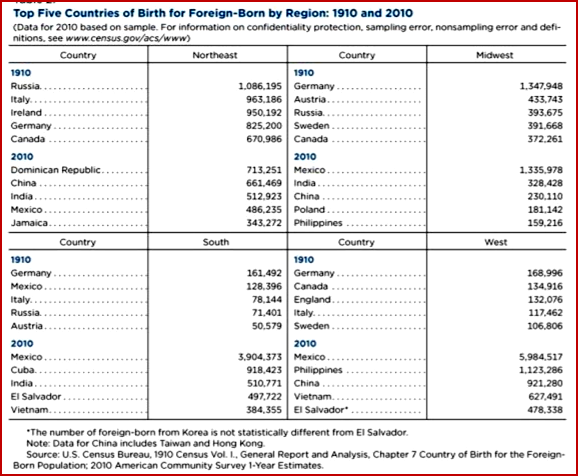 Throughout all years, the West has had either the highest or the second-highest percentage of residents hailing from another country.

While the percentage of foreign-born has grown in all regions over the last few decades, the distribution of the foreign-born population has increased in the South and West, mirroring a similar pattern for the overall population (Figure 2).

Almost 32 percent, or 313,000, were foreign-born, which is more than 10 percentage points higher than other regions at that time.

States that frequently have the highest share of residents who are foreign-born are New York (13 times), New Jersey (10 times) and California (9 times) says Paul Jacobs a statistician in the U.S. Census Bureau’s Population Division.

Other states only made the top five list for short periods of time. North Dakota made the list in 1890 and 1900. Florida, fourth in 2016 in the share of residents who are foreign-born, first made an appearance on the list in 1980.

Nevada is somewhat unique because the Silver State was among the top five states in share of residents who are foreign-born in the three censuses after joining the Union in 1864. It reemerged in 2010 as one of the top states.

The distribution of the foreign-born population at the state level continues to evolve, as the current top-destination states receive a smaller share of new arrivals, opening the possibility of newer states making the top five list.

Some Countries of Origin Place High in All Regions

In some cases, a foreign-born group may fall in the top five countries of origin across all four regions during a given census year — those born in Germany in 1910, for example, and those born in Mexico in 2010.

As the share of foreign-born residents today matches historic highs from the late 1800s and early 1900s, foreign-born groups will continue to play a role in contributing to regional differences in culture as they have throughout much of American history.

*The foreign-born population includes anyone who is not a U.S. citizen at birth. This includes those who have become U.S. citizens through naturalization.