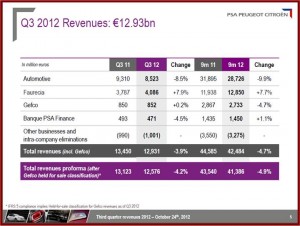 PSA Peugeot Citroën announced new financing moves this morning – including a bailout by the French government – as the embattled company posted a 4% decline in Q3 sales to €12.9 billion. PSA also cut its 2012 European sales forecast to a -9% drop, another -1% from its last forecast. The company, whose debt is now close to junk ratings and stock is trading at the lowest price in four decades, said cash flow remains negative and debt would rise to €3 billion by the end of Q4, an increase of  €600 million from €2.4 billion at the end of Q2.

To stay afloat the French company is turning to its finance subsidiary, Banque PSA Finance, for  €11.5 billion (~$15 billion) in cash, of which €1 billion is additional liquidity. The main credit agreements have been renegotiated, Peugeot said, with draw-downs possible during 2013-2015.

The French State will provide up to €7 billion in refinancing guarantees for new bond issues during the same 2013-2015 period. It is the latest example of a taxpayer bailout of an ailing auto company facing insolvency and limited credit in the private capital markets, if non-government credit now exists at all. The massive subsidy is subject to EU approval by the Competition Commission in Brussels, and is vehemently opposed by the German state of Lower Saxony, the second biggest shareholder of VW, the largest automaker in Europe.

The Supervisory Board of Peugeot S.A. said it “positively welcomed” the announcement of more cash by the Group’s partner banks and the French State. The Board said that for as long as the State guarantee is in effect, no dividends will be paid, no shares will be bought back and neither stock options nor performance shares will be granted to members of the Managing Board.

French taxpayers will also be subsidizing General Motors and its loss-making, cash bleeding Opel Vauxhall operations because of  an alliance with GM announced in February. GM now owns 7% of Peugeot. The two companies said today that they will jointly develop four common platforms for upcoming vehicles:

Both companies once again claimed that the previously stated synergy target of $2 billion annually is achievable within five years, a claim that has met with a fair amount of skepticism. If achieved, it might be too little too late for their sinking European operations anyway.

GM is planning to close its Opel Zafira plant in Bochum, Germany after the run-out of the current Zafira van in 2015, but that alone is not enough to return Opel to profitability after decades of losses totaling hundreds of billions dollars. (GM Q2 Profits Drop to $1.5 Billion from $2.5 Billion as Its European Losses Grow. Revenue and Cash on Hand also Decreased.) Opel employs 20,800 people in Germany, and more than 40,000 across Europe. The head of GM Europe was ousted in July over the continuing losses and the lack of progress.

PSA previously said it will close the Citroën C3 Aulnay plant in 2014, and trim production at Rennes, which makes the Peugeot 508, Citroën C5 and C6. More than 4,400 jobs are affected. Work in other plants could absorb 1,500 of the displaced workers in the local Paris area. The company will also pursue voluntary separations of its corporate workforce – as many as 8,000 jobs are at stake, on top of 6,000 eliminated last year.

Now, the question arises if the French state is asking for job guarantees as a condition to provide the taxpayer subsidies. With its Peugeot and Citroën brands, the PSA Group sold 3.5 million vehicles worldwide in 2011, but only 42% of those were outside Europe. As Europe’s second largest carmaker, it recorded sales and revenue of more than €59.9 billion in 2011.

“Peugeot is in trouble, because they don’t sell enough cars, and it is of utter importance for the French carmaker that its bank branch, PSA Finance, is granted low interest rates. This is the objective, the security that would be provided by the government,” said Frost & Sullivan senior consultant Nicolas Meilhan.

“If you compare a number of European countries and their respective manufacturing costs, then the figures speak for themselves: car manufacturing costs in France are €36 per hour, Germany €36, Czech Republic €10, Poland €6, and finally Romania at €3 Euros,” said Meilhan “The bottom line of this is, that it is very hard for Peugeot to compete with cars manufactured in Eastern Europe.”