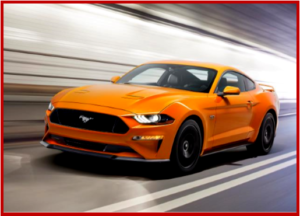 Pro wrestler Dwayne ‘The Rock’ Johnson introduced the new  freshened Ford Mustang in Los Angeles today. Mustang was the best-selling sport coupe in the U.S. during 2016. A mildly freshened version goes on sale this fall. Ford used Johnson to give one of the first models available to a member of the military. A video of the debut was launched on Johnson’s social channels, including YouTube, Instagram and Facebook, where Mustang holds the title for the most-popular car with more than 8.4 million ‘likes.

Ken Zino is an auto industry veteran with global experience in print, broadcast and electronic media. He has auto testing, marketing, public relations and communications expertise garnered while working in Asia, Europe and the U.S.
View all posts by Ken Zino →
This entry was posted in design and styling, people and tagged autoinformed, autoinformed.com, Dwayne The Rock Johnson, ford mustang freshened, Ken Zino, pony cars. Bookmark the permalink.