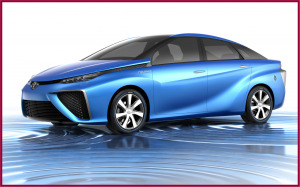 The timing for U.S. sales is dependent on California’s hydrogen infrastructure program that aims for 35 hydrogen-refueling centers in the Los Angeles area by 2015.

The battle of the ‘green press releases’ continued today as both Honda and Toyota teased their upcoming fuel cell electric vehicles that will appear in the U.S. at the Los Angeles Auto Show this month.

As AutoInformed reported last September, Toyota claims it will have fuel cell EVs on sale in the U.S. by 2015. (Toyota to Retail Hydrogen Fuel Cell Hybrids in U.S. by 2015) After debuting the Toyota FCV in Tokyo just hours before, Toyota will show an FCV with a claimed driving range of at least 500 km and refueling times as low as three minutes, roughly the same time as for a gasoline vehicle.

Toyota says it has developed a small, light-weight fuel cell stack and two 70 MPa high-pressure hydrogen tanks placed beneath the specially designed body, that can accommodate up to four occupants. Fully fueled, the vehicle can provide enough electricity to meet the daily needs of an average Japanese home (10 kWh) for more than one week.

The Toyota FC Stack has a power output density of 3 kW/L, more than twice that of the current “Toyota FCHV-adv” FC Stack, and an output of at least 100 kW. In addition, the FC system is equipped with Toyota’s high-efficiency boost converter. Increasing the voltage has made it possible to reduce the size of the motor and the number of fuel cells, leading to a smaller system offering enhanced performance at reduced cost.

Honda, perennial number two to Toyota’s global hybrid sales lead, debut’s its next-generation fuel-cell electric vehicle that it too it claim is launching in the U.S and Japan in 2015 and later in Europe. Honda, which has been playing with fuel cells since 2002, released no further technical details, but it is working with General Motors to make “practical” fuel cell vehicles – translation somewhere in, oh, the $50,000 range by 2020, instead of $200,00-$500,000 for limited run prototypes. Initially, what will be very expensive fuel cell vehicles likely will be leased as demos, and major automakers are lobbying government bodies for vast taxpayer-funded subsidies.

This makes conventional $40,000-$100,000 battery electric EVs – currently a small fraction of the new vehicle market – look like bargains compared to what automakers would have to charge to make a profit on a fuel cell vehicle.

The allure of fuel cells remains efficiency, roughly 50-60% compared to an internal combustion engine’s ~25%. Emissions are also attractive – no pollutants at the tailpipe and some studies indicate a drastically reduced overall well-to-wheel emissions when compared with today’s fossil fuel engines. (Caveat: This depends on how the hydrogen is generated, of course.)

Since hydrogen fuel cell electric vehicles share a large proportion of the electric motor and drivetrain technology with other electric and plug-in hybrid vehicles, the real challenges come from energy storage and making the hydrogen fuel. Costs are astronomically high for this space age technology. A fuel cell is an electro-chemical machine like a battery, but unlike a battery it does not need recharging. Refueling can also be a challenge since very high pressures are involved.

Ken Zino is an auto industry veteran with global experience in print, broadcast and electronic media. He has auto testing, marketing, public relations and communications expertise garnered while working in Asia, Europe and the U.S.
View all posts by Ken Zino →
This entry was posted in alternative fuels, electric vehicles, environment and tagged autoinformed, autoinformed.com, fcev, fuel cell, Ken Zino. Bookmark the permalink.