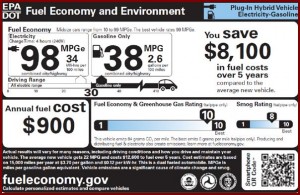 In its annual report on the average fuel economy of vehicles sold in the United States, the EPA said today that 2012 model vehicles achieved an all-time high rating of 23.6 miles per gallon. This means a +1.2 mpg increase compared to 2011, making it the second largest annual increase in the last 30 years. Fuel economy has now increased in seven of the last eight years as a combination of higher fuel prices and government regulations has shifted the market toward more efficient vehicles.

The large fuel economy improvement is part of longer-term trends. Fuel economy has increased by 2.6 mpg or 12% since 2008, and by 4.3 mpg or 22% since 2004. The average carbon dioxide emissions of 376 grams per mile in model year 2012 also was a record low. While EPA says it does not have final data for model year 2013, preliminary projections are that fuel economy will rise by 0.4 mpg, and carbon dioxide emissions will decrease by 6 grams per mile.

EPA’s annual “Light-Duty Automotive Technology, Carbon Dioxide Emissions, and Fuel Economy Trends: 1975 through 2013” attributes much of the recent improvement to the rapid adoption of more efficient technologies such as gasoline direct injection engines, turbochargers, and advanced transmissions. Consumers have many more high fuel economy choices due to these and other technologies, such as hybrid, diesel, electric and plug-in hybrid electric vehicles.

They can choose from five times more car models with a combined city/highway fuel economy of 30 mpg or more, and from twice as many SUVs that achieve 25 mpg or more, compared to just five years ago.

Ken Zino is an auto industry veteran with global experience in print, broadcast and electronic media. He has auto testing, marketing, public relations and communications expertise garnered while working in Asia, Europe and the U.S.
View all posts by Kenneth Zino →
This entry was posted in fuel economy or emissions and tagged autoinformed, autoinformed.com, cafe, epa, Ken Zino. Bookmark the permalink.