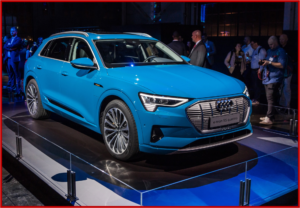 Audi e-tron is the first all-electric production model from the brand. It’s a five-seater, electric mid-sized crossover SUV that will arrive in the U.S. in the second quarter of 2019. ALA Tesla it’s is available now for U.S. customers to place reservations.

Compatible with both AC and DC charging via the SAE Combined Charging System (CCS), the Audi e-tron – in an apparent industry first – debuts a DC fast charging capability of up to 150 kW available at select high-speed public charging stations, which can deliver up-to an 80% charge in approximately 30 minutes.

Audi and Amazon will deliver a first-ever in-home electric vehicle setup through Amazon Home Services for the e-tron, an optional installation of a 240-volt charging system in a home garage or other location, including 1,000 kWh of charge powered by Electrify America. (Read AutoInformed.com on Automobility LA – Fast EV Charging Network Plugged and Supported by Volkswagen Subsidiary Electrify America) 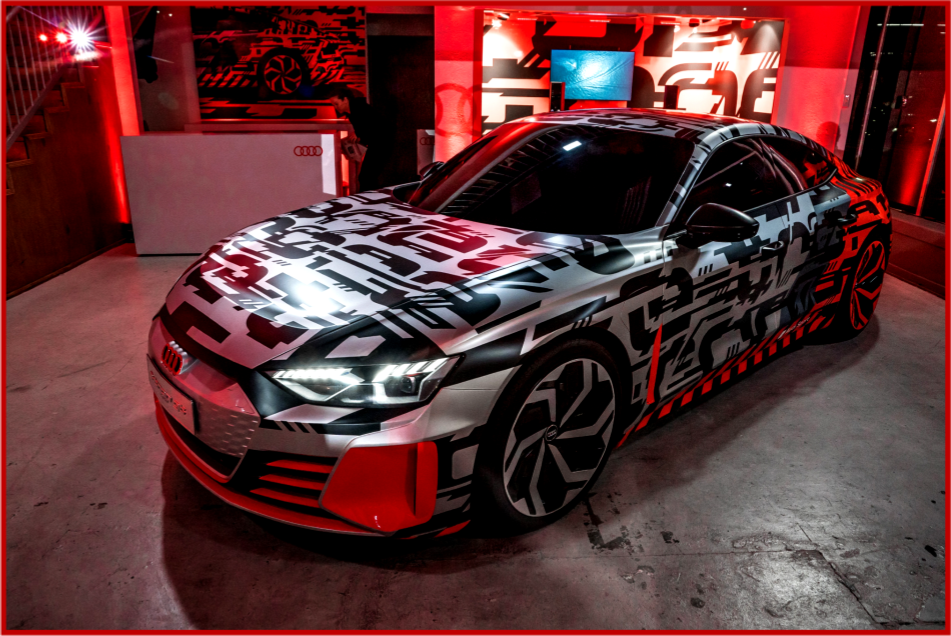 After being out-engineered by Toyota with its immensely successful hybrid engineering and marketing, the Germans are trying to recovery with pure EVs to save their technology reputations.

The electric powered Audi e-tron GT concept  is a four-door coupe is making its debut as a show car. The volume-production counterpart is set to follow in approximately two years, and the concept will make its film debut in Marvel Studios’ Avengers 4, set to be released in theaters summer 2019.

The next electric Audi is being launched, following in the footsteps of the Audi e-tron SUV and the Audi e‑tron Sportback slated for 2019. The flat-floor architecture that provides for exciting proportions and a low center of gravity. With 434 kW (590 horsepower) it’s a sports-car-like coupe that competes with sister brand Porsche.

Torque is transferred to the wheels via the quattro permanent all-wheel drive with torque vectoring. The performance subsidiary Audi Sport GmbH is responsible for subsequently transforming the car into a volume-production model.

Separate electric motors are at the front and rear axles. In both cases these are permanent magnet synchronous motors. They put down the torque onto the road via all four driven wheels – it’s a quattro, no surprise here. An electric one because there is no mechanical link between the front and rear axle. The electronic control system coordinates the drive between the axles as well as between left and right wheels. That means in theory optimum traction and just the desired amount of slip.

Audi is touting that not all the competition can match fully utilizing the drive’s acceleration potential several times in succession. With other designs, the drive is switched to overdrive for thermal considerations, the Audi e-tron GT – it’s claimed – can provide the driver with the full potential of both motors and the battery thanks to its sophisticated cooling strategy.

The range will be more than 400 kilometers (248.5 mi), determined according to the new WLTP standard. The required drive energy comes from a lithium-ion battery with an energy content of more than 90 kWh, which takes up the entire underfloor area between the front and rear axle with its flat design.

An advantage of this design is the car’s extremely low center of gravity – comparable with that of the Audi R8 – which in turn benefits dynamic handling. All-wheel steering translates this into agility and precision, improved by good directional stability.

The regeneration system increases the range by up to 30%.. It involves both the two electric motors and the electro-hydraulically integrated brake control system. Different recuperation modes are combined: manual coasting recuperation using the shift paddles, automatic coasting recuperation via what’s called a predictive efficiency assist, and brake recuperation with smooth transition between electric and hydraulic deceleration.

Up to a mild 0.3 g, the Audi e-tron GT concept recuperates energy solely via the electric motors, without using the conventional brakes – that covers – it’s said without data that AutoInformed has seen – more than 90% of all decelerations. Therefore, energy is fed back to the battery in practically all normal braking maneuvers.

The wheel brakes are involved only when the driver decelerates by more than 0.3 g using the brake pedal. The Audi e-tron GT has high-performance ceramic disks which also operate with multiple extreme decelerations without compromising braking performance.

The battery in the Audi e-tron GT concept can be charged in several ways: using a cable which is connected behind the flap in the left front wing, or by means of contactless induction with Audi Wireless Charging. Here a charging pad with integral coil is installed permanently on the floor where the car is to be parked and connected to the power supply. The alternating magnetic field induces an alternating voltage in the secondary coil fitted in the floor of the car, across the air gap. With a charging output of 11 kW the Audi e-tron GT concept can be fully charged overnight.

Wired charging is much faster as the four-door coupe has an 800-volt system. This substantially reduces charging times compared with conventional systems that are currently in use. It takes around 20 minutes to recharge the battery to 80 percent of its capacity, once again providing a range of more than 320 kilometers (198.8 mi) (WLTP). The e-tron GT can, however, also be recharged at charging points with lower voltages, providing the driver with access to the entire charging network.

Audi started its EV trend with the world premiere of the all-electric SUV Audi e-tron in Frankfurt during September 2018. By 2025 Audi will offer twelve automobiles with all-electric drive in “important markets” worldwide and achieve roughly one-third of its sales with electrified models. The SUVs within this portfolio include the Audi e-tron and the Audi e-tron Sportback due to make its debut in 2019. In addition, there will be a range of models with classic body layout such as Avant and Sportback. The range will cover every relevant market segment from the compact to the full-size class.

On the concept car the designers have tried for the consistent use of sustainable materials – a statement of contemporary automotive design and decidedly not the standard Teutonic cold interior that dominated for decades.

Animal-based products are not used at all: the Audi e‑tron GT concept comes with, ahem, a vegan interior. Fake leather is used on the seats and other trim surfaces. Fabrics made from recycled fibers are used on the seat cushions as well as the armrests and on the center console. (marketing babble alert) Microfiber material adorns the headlining and the trim of the window pillars. the deep-pile floor carpet is made from sustainable Econyl yarn, a recycled fiber made from used fishing nets.