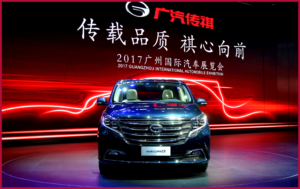 What’s claimed to be China’s fastest growing automaker by themselves, GAC Motor, debuted the brand’s first MPV – GM8 – at the 2017 Guangzhou International Automobile Exhibition on this month, saying it will be at NAIAS in January “highlighting advanced design concepts and forward-looking technologies.”

The GM8 was created on GAC Motor’s level C platform and has captain’s seating, intelligent technologies and up-to-date safety and security equipment.

“The Chinese auto market is seeing a growing demand for spacious and practical MPV that can accommodate family and business needs,” said Yu Jun, president of GAC Motor. “With the all-around GM8, GAC Motor aims to refresh the high-end standards of Chinese MPV market and redefine its landscape in the new age of high-end vehicles.”

“By taking a lead in creating new life with science and technology, GAC Motor has completed a high-end product lineup to meet the future trends while constructing a green and low-carbon auto lifestyle with the advantages in the new energy sector.”

GAC Motor is expected at NAIAS in 2018 with a extensive lineup, including he GM8, GA8, GS8, a new mass-production sedan GA4 and an all-new concept car.

“GM8 marks a new milestone that completes our high-end product lineup, we are entering an all-new era as we position our brand towards the high-end market,” he said. “We are building the first North America R&D Center in Silicon Valley this year and planning to enter the North American market by 2019.”

Founded in 2008, Guangzhou Automobile Group Motor CO., LTD (GAC Motor) is a subsidiary of GAC Group that develops and manufactures vehicles, engines, components and auto accessories, achieving a year-to-year growth rate of 96% in 2016, the highest among all Chinese brands in the corresponding period. GAC makes Honda-branded autos. Actually, GAC  company has five offshore partners supplying China. These include Fiat, Honda, Isuzu, Mitsubishi, and Toyota. Other brands linked with GAC are Everus and Hino.