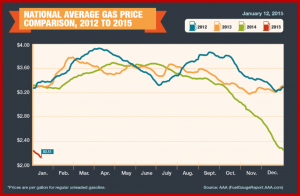 The global price of crude has lost more than half its value since mid-2014.

U.S. motorists are paying an average price at the gasoline pump today of $2.10 per gallon that is more than 40% lower than the 2014 peak of $3.70 reached on April 28. The national average continues to test lows not seen since May 2009. Today’s price is nine cents less than one week ago, 47 cents less than one month ago and $1.12 less than one year ago.

Without any major increases in the global price of crude oil, AAA expects the national average price for regular unleaded gasoline to remain below $3.00 per gallon in 2015.

Drivers welcome lower gas prices but economists continue to fret about the sustained low oil prices on the oil industry. In the United States where the cost of oil extraction is more expensive, oil companies may reassess their plans to factor in profit margins that are sharply lower or even reversed as markets register multi-year lows with no end in sight.

Moreover, countries that rely heavily on oil revenues to fund government services – and some of them fund terrorists – may find themselves in situations where reductions to social programs are necessary, which could lead to civil unrest. Either of these dynamics has the potential to put upward pressure on prices, in AAA’s view.

The global price of crude has lost more than half its value since mid-2014. OPEC said that it would not intervene in the market to force prices higher. It plans to sustain its current production levels, with the earliest possibility for supply reductions reportedly pushed to their next meeting scheduled for June.

Ken Zino is an auto industry veteran with global experience in print, broadcast and electronic media. He has auto testing, marketing, public relations and communications expertise garnered while working in Asia, Europe and the U.S.
View all posts by Ken Zino →
This entry was posted in energy, prices and tagged autoinformed, autoinformed.com, Ken Zino, opec. Bookmark the permalink.