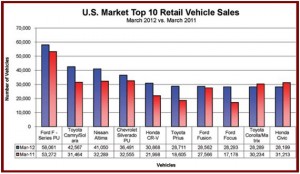 A combination of more fuel efficient vehicles and buyer's needs - real or perceived - hasn't led to a drastic shift in the auto market so far.

With U.S. gasoline prices up more than 25 cents compared to a year ago to a national average of $3.94 a gallon, a new survey claims that SUVs remain the first choice among potential buyers as their vehicle replacement choice.

Hooey or not, results from AutoPacific’s latest Fuel Price Impact Survey (FPIS) claims that small cars are actually the third choice of respondents for a vehicle replacement. In addition, 76% surveyed say they would replace their current vehicle with a similarly sized one, whereas only 18% say they would go smaller.

Surveys are one thing, but actual buyer behavior is another. Through the first two months of the year, auto sales of sub-compact and compact passenger cars have accounted for approximately 25% of all retail sales. Sales of sub-compact vehicles have increased the most, up more than 35%, compared to the same period in 2011.

Nevertheless, AutoPacific concludes that U.S. drivers would not shift to a different vehicle segment when they replace their current vehicle. Differences from replacement vehicle segment choice and what respondents currently own range between 0-2 percentage points, according to survey results. This means that 28% of respondents own an SUV, and that same percent would choose one for their replacement as well. About 19% would choose a small car, which are two percentage-points higher than current respondent ownership. This is in contrast to the July 2008 fuel price peak when the top replacement choice was small cars at 32% of the sample, 12 percentage points higher than current ownership at that time.

However, 33% say higher fuel prices would cause them to change their vehicle replacement choice, but it would take about a $0.93 jump from what currently paying, on average. In addition, remember virtually all vehicles are more fuel efficient today than they were a couple of years ago no matter what segment they occupy.