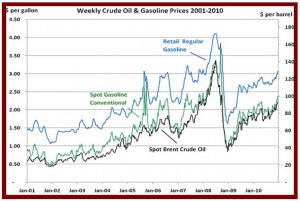 There is more than a 25% probability that the national average retail price for regular gasoline could exceed $3.50 per gallon this summer.

At the end of December 2010 gasoline prices in the United States rose above $3 a gallon for the first time since October of 2008. The difference this time around is that in 2008 the pricing trend was downward, having peaked that July at $4.11 a gallon.

Rampant speculation in the futures market and the collapse of the financial markets after the Bush Administration let Lehman Brothers fail for ideological reasons, created the ongoing global Great Recession. As a result, the world was literally awash in oil that had fewer users than speculators, who had nowhere to store the crude oil as future contracts came due. So no surprise, oil prices collapsed – all the way to $1.61 per gallon in December 2008 – a roller coaster ride that wreaked havoc in the U.S. economy as the Obama Administration assumed power.

Since then oil prices have been rising, with negative consequences for the ailing U.S. economy. Simply put when oil prices go up, the auto business in the U.S. usually goes down after roughly a six month lag.

Starting in October of last year, oil began to climb again, increasing 34 cents per gallon through the end of December. Over the same period, crude oil prices increased $13.35 per barrel or roughly 32 cents per gallon for a 42 gallon barrel of oil. And U.S. unemployment remains stuck at almost 10% nationally, with no decrease in sight.

The U.S. continues to import oil at a gas guzzling rate of almost 12 million barrels per day, as highway travel grows along with a fragile and jobless economic recovery.

Since there has been little change in the way oil is produced, traded or regulated, there is no reason speculators cannot keep oil moving up to the record $147 a barrel that it hit in July of 2008. In fact, some analysts warn oil prices won’t stop there this time.

The Oil Minister of Saudi Arabia, Ali Naimi, today claimed that the oil markets are in balance in balance and price stability should continue at 2010 levels.

“I expect price stability to continue at last year’s rates. The only thing I am concerned about is the upward or downward pressure of speculators, analysts and future market speculators on prices away from natural market fundamentals,” Naimi said.

Nonetheless, oil imports are a national security threat of epic proportion that distorts our foreign policy, sends our patriotic young men and women off to needless wars, and is a massive transfer of our wealth to other nations, including some that would destroy us – if given the chance. It has been a problem we have ignored for decades.

There is a sorry history here of failed policy initiatives and big money lobbying against them going all the way back to the Carter Administration, which proposed a comprehensive or omnibus bill, crucial – then as now – to wean the U.S. from foreign oil after the first OPEC oil embargo and crisis. Carter failed to prevail against big oil, and we still have no coherent energy policy.

As is now the case – and was then – enormous sums of money are involved, and there are no lobbyists for American Energy Independence, but armies upon armies of them for special interest, multi-national corporations and Wall Street traders benefitting from the status quo – and they care not a sack of tea about our independence, quite the contrary.

If the Organization of the Petroleum Exporting Countries (OPEC) do not increase production as global consumption grows this year crude oil prices will keep rising.

The rate of economic recovery, both in the U.S. and globally remains unknown, though. Europe is a recession-wracked mess, and only India and China appear certain to grow. If the U.S. stays in recession it will help ease oil prices, but it won’t created any jobs, a terrible dilemma where we lose either way.

There is regional variation in the forecast, with average expected prices on the West Coast about 26 cents per gallon above the national average. EIA says there is “significant uncertainty” surrounding the forecast.