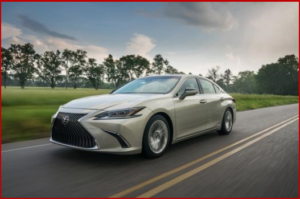 Too bad about the spreading epidemic of the now ubiquitous Lexus snout.

Gen Seven of the all-new 2019 Lexus ES will go on sale in September with a base price of $39,500, a $550 increase over the outgoing model. The latest ES sedan claims to deliver enhanced comfort, craftsmanship and luxury in what is undoubtedly one of the most competitive – and shrinking – segments in the industry.

Built on the all-new Global Architecture – K (GA-K) platform, it’s a little more, well, adventuresome than traditional Toyota designs that the company built its reputation on.

In addition to the ES 350, the ES 300h will go on sale with a base price of $41,310, a $510 decrease compared to its predecessor. The new ES 300h has EPA mileage estimates of 43 mpg city, 45 mpg highway and 44 mpg combined. This in AutoInformed’s view makes it the most fuel-efficient luxury vehicle without a plug (so far).

A new addition to the lineup in 2019, the ES 350 F SPORT arrives with a base price of $44,035. It includes numerous upgrades such as a re-tuned suspension, 19-inch wheels and tires and “unique aluminum interior trim.”

All prices exclude a $1,025 fee for delivery, processing and handling.

ES 350s are powered by a 3.5-liter V6 that is designed to deliver acceleration along with what was once heresy at Lexus –prominent operating noises. With an update to D-4S fuel injection, the engine now develops 302 horsepower and 267 pound-feet of torque.

Despite an increase in both power and torque, the new ES also delivers better fuel efficiency than before with EPA mileage numbers of 22 mpg city, 33 mpg highway and 26 mpg combined. Compared to the previous ES 350, that’s a two mile-per-gallon improvement in combined driving in addition to an extra 34 horsepower and 19 extra pound-feet of torque. For the new 2019 ES 350 F SPORT, the official EPA numbers are 22 mpg city, 31 mpg highway and 25 mpg in combined driving.

Ken Zino is an auto industry veteran with global experience in print, broadcast and electronic media. He has auto testing, marketing, public relations and communications expertise garnered while working in Asia, Europe and the U.S.
View all posts by Kenneth Zino →
This entry was posted in marketing, new vehicle and tagged autoinformed, autoinformed.com, automotive blog, Automotive Commentary, Ken Zino. Bookmark the permalink.