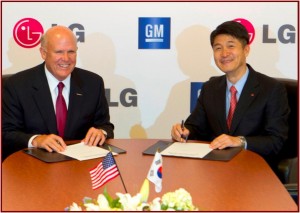 The companies will "jointly design and engineer" future electric vehicles.

General Motors and the Korean LG Group will jointly design and engineer future electric vehicles, the companies announced today. An agreement was signed yesterday that expands LG’s taxpayer subsidized business as the battery cell supplier for the Chevrolet Volt and Opel Ampera hybrid vehicles into more sophisticated work on components and even vehicle design. The agreement does not involve an exchange of equity between the companies.

GM said under the deal it would expand the number and types of electric vehicles it makes and sells. Teams of LG and GM engineers will work on key components, as well as vehicle structures and architectures. Vehicles resulting from the partnership will be sold globally at future unspecified dates.

“This is a strategic development for LG and we fully support GM’s goal to lead the industry in the electrification of the automobile,” said Juno Cho, president and chief operating officer of LG Corp.

In a statement GM said that accelerating the pace of roadworthy technology is more important than ever with the announcement of a number of more stringent emission and fuel consumption regulations around the world, including the recent agreement calling for a U.S. Corporate Average Fuel Economy (CAFE) of 54.5 mpg (23.2km/l) by the end of the 2025 model year. Electric vehicles, which have no tailpipe emissions and require no gasoline, are expected to play a major role in reaching the CAFE goal because of  the favorable ways governments count the vehicles toward fuel economy averages.