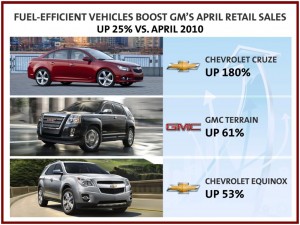 Fleet accounted for 33% total General Motors sales during April. Incentives were down slightly.

General Motors dealers in the United States reported 232,538 total sales in April, a 27% increase versus April a year ago. Retail sales to individual customers, rose 25% versus last April with cars and crossovers up 49% and 28%, respectively. How this performance compares to other companies will not be known until late today. It looks like GM’s retail share will be in the 16.5% – 17% range, which would be higher than 2010. In any event GM had a great month.

“Recently, rising fuel prices have led many to re-think their vehicle choice,” said Don Johnson, vice president, U.S. Sales Operations. “Because of the investments we’ve made in fuel-efficiency and global product architectures, the company is well positioned to meet these needs.”

At month end the days supply of General Motors cars stood at a skimpy 48 days against an industry norm that is usually considered ideal for selling at 60 days. Crossovers were at 52 days, while trucks were at a high of 111 days.